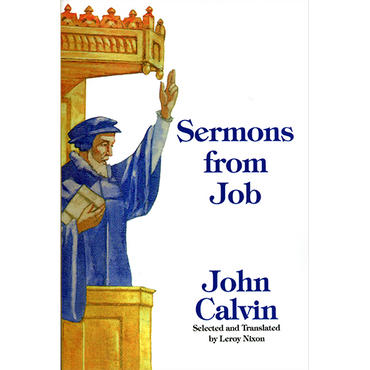 Here is Calvin at his best, dealing with God's majesty, inscrutability, and all-inclusive providence. Marked by directness, clarity, and simplicity, Calvin's series of sermons on Job is probably the most famous of all his published sermons. The Geneva Reformer expresses in these messages his deep and awesome sense of the majesty of God.

A true understanding of Calvin cannot be gained without reading his sermons, for Calvin thought himself first of all a preacher, then a theologian. Calvin scholar Emile Doumergue said fittingly at the great celebration of the four hundredth anniversary of Calvin's birth, on July 2, 1909, speaking from the very pulpit from which Calvin had preached, "That is the Calvin who seems to me to be the real and authentic Calvin, the one who explains all the others: CALVIN THE PREACHER OF GENEVA, molding by his words the spirit of the Reformed of the sixteenth century."

Leroy Nixon, the translator of these sermons wrote, "Of all the sermons by Calvin, the 159 on the book of Job have probably been the most famous. They express clearly his sense of the majesty of God. To work with them over the past three years has been a rich and exciting spiritual experience. . . If the reader gets only a fraction of the benefit which came to the translator, the reader will be amply rewarded. Calvin's piety is well expressed in the sermons titled, 'The Lord Gave; the Lord has taken Away'; 'Blessed is the Man whom God Corrects'; 'Though He Slay Me, Yet Will I Trust in Him;' 'Does Not God Count My Steps'; ' and 'The Right Use of Affliction.' Pervading these sermons is the prayer and conviction that whatever comes to pass may all be for the glory of God."

"Among all those who have been born of women, there has not risen a greater than John Calvin; no age before him ever produced his equal, and no age afterwards has seen his rival. He propounded truth more clearly than any other man who ever breathed, knew more of Scripture, and explained it more clearly." - Charles Spurgeon

"Here we have the secret of Calvin's greatness and the source of his strength unveiled to us. No man ever had a profounder sense of God than he; no man ever more unreservedly surrendered himself to the Divine direction." - B.B. Warfield

"Calvin was the exegete of the Reformation and in the first rank of biblical exegetes of all time." - John Murray

"Calvin had no weapon but the Bible. He preached from the Bible every day, and under the power of that preaching the city began to be transformed. As the people of Geneva acquired knowledge of God's Word and were changed by it, the city became, as John Knox called it later, a New Jerusalem from which the gospel spread to the rest of Europe, England, and the New World." - James Montgomery Boice

"This was always the root issue for Calvin. How might he best show forth for all of Geneva and all of Europe and all of history the Divine Majesty? He answered with a life of continuous expository preaching. There would be no better way to manifest the full range of the glories of God and the majesty of his being than to spread out the full range of God's Word in the context of the pastoral ministry of shepherding care." - John Piper