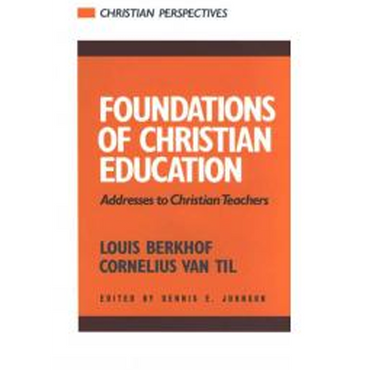 (1874-1957) He taught for thirty-eight years at CalvinTheological Seminary in Grand Rapids, Michigan.

With Christian schools and home schooling on the rise as alternatives to government-controlled instruction, parents and teachers need to be reminded anew of the rationale for Christian education. This book recalls the prophetic voices of two educators who were especially qualified to clarify the foundational issues in Christian schooling. In these pages Cornelius Van Til, best known as professor of apologetics at Westminster Theological Seminary for many years, challenges non-Christian thought at its presuppositions. Louis Berkhof, noted systematic theologian and former president of Calvin Theological Seminary, firmly anchors the task of Christian education to the great truths of the Christian faith. The republication of these essays, originally delivered to the National Union of Christian Schools over a half century ago, could be considered Dr. Van Til's last request before his death in 1987. His lifelong concern for Christian education and that of Dr. Berkhof, who died in 1957, are captured in these discussions of the spiritual battle over the minds of today's children—and tomorrow's leaders.