Flowers From a Puritan’s Garden: Illustrations and Meditations 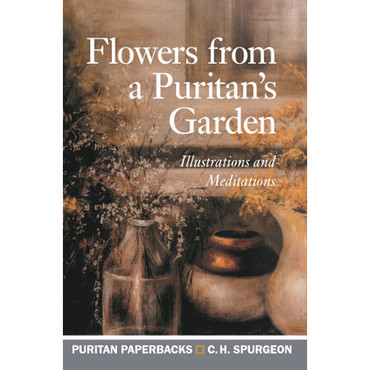 Flowers From a Puritan’s Garden: Illustrations and Meditations

Do you ever underline helpful passages in books you are reading?This is exactly what C. H. Spurgeon used to do when reading the Puritans. Whilst reading Thomas Manton, he was struck time and time again by the ‘solid, sensible instruction, forcibly delivered’ that he found there.

To Manton’s thoughts, Spurgeon added his own; the result being, as Spurgeon put it, that he cleared Manton’s house of all his pictures, and then hung them up in frames of his own. These newly framed pictures are exhibited in Flowers From a Puritan’s Garden, which Spurgeon intended to be used as an aid to meditation and prayer. Preachers will also find inspiration in these Manton-Spurgeon combinations for sensible and clear sermon illustrations.

Charles Haddon Spurgeon (1834-92) was England’s best-known preacher for most of the second half of the nineteenth century. After a childhood in Essex, when he owed much to Christian parents and grandparents, he was converted in 1850 at the age of ﬁfteen. He was then assisting at a school in Cambridge and it was in these Cambridge years that he came to Baptist principles and was called to the Baptist pastorate in the near-by village of Waterbeach. From there he moved to New Park Street, London in 1854 at the age of nineteen.

Roughly speaking, Spurgeon’s public work can be divided up into four decades. Through the 1850s he was ‘The Youthful Prodigy’ who seemed to have stepped full-grown into the pulpit. At the age of twenty the largest halls in London were ﬁlled to hear him; at twenty-one the newspapers spoke of him as ‘incomparably the most popular preacher of the day’; when he was twenty-three, 23,654 people heard him at a service in the Crystal Palace.

In the next decade, the 1860s, his work might best be described in terms of ‘The Advancement of Gospel Agencies’. The institutions which he founded, and for which he remained responsible, included a College to train pastors; a publications enterprise (with a weekly published sermon and a monthly magazine The Sword and the Trowel); an Orphanage; a Colportage Association to spread Christian literature; and above all the Metropolitan Tabernacle itself, opened for the church he served in 1861 and capable of holding about 6,000. The congregation which he pastored grew from 314 in 1854 to 5,311 in 1892.

Onlookers often supposed that so many enterprises could never be maintained at the high level of usefulness with which they began, but they were, and the 1870s might well be described in terms of ‘Holding the Ground’. On every front the work was being blessed.

Then came the 1880s and by far the most difﬁcult period in Spurgeon’s life. In this last decade he was faced with increasing controversy and a title for his last years could well be his own words, ‘In Opposition to So Many’.

By the time Spurgeon was ﬁfty-seven in 1891 his health was utterly broken. When he left Herne Hill station, London, on 26 October 1891, for the south of France, he said to the friends who came to say good-bye, ‘The ﬁght is killing me’. He died at Menton three months later.