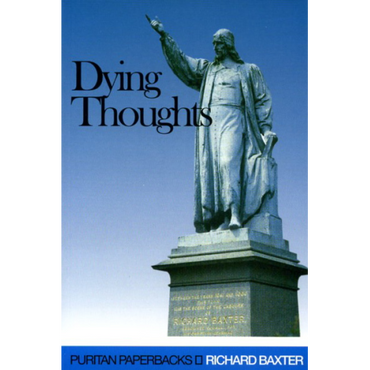 Richard Baxter (12 November 1615 – 8 December 1691) was an English Puritan church leader, poet, hymn-writer, theologian, and controversialist. Dean Stanley called him "the chief of English Protestant Schoolmen". After some false starts, he made his reputation by his ministry at Kidderminster, and at around the same time began a long and prolific career as theological writer. After the Restoration he refused preferment, while retaining a non-separatist Presbyterian approach, and became one of the most influential leaders of the nonconformists, spending time in prison.

An exposition of Philippians 1:23 by one of the most outstanding pastors of the golden age of English Puritanism, dealing honestly with the doubts and fears that often assail a Christian facing the prospect of eternity, while also providing much needed counsel, strength and comfort. A devotional classic. More well known for his Reformed Pastor, Richard Baxter was the outstanding pastor of Kidderminster. Dying Thoughts is his exposition of Paul's words in Philippians 1:23: 'For I am in a strait betwixt two, having a desire to depart, and to be with Christ, which is far better.' Benjamin Fawcett who made this abridged version of the original work wrote, – The 'Dying Thoughts' of Mr. Baxter chiefly present to our view what every Christian may attain, and what it is the highest interest, as well as the indispensable duty of every Christian to aspire after. In this little book, we see Baxter wrestling with his own doubts and fears as he faces eternity, jealously examining his own heart, anxious to test his own sincerity, taking nothing for granted. Baxter wanted to die with every grace in his soul in full vigour. A man of like passions as ourselves, his Dying Thoughts provides much needed counsel, strength and comfort because it deals with the same conflicts, complaints and desires which fill our own hearts.