Does God Believe in Atheists? by John Blanchard (Hardcover) 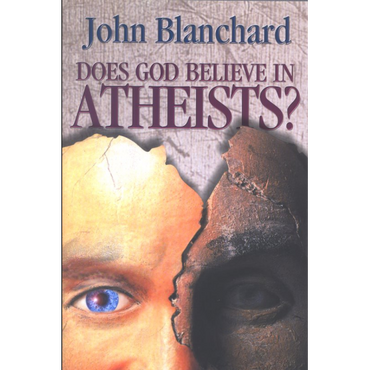 Does God Believe in Atheists? by John Blanchard (Hardcover)

Dr. John Blanchard is an internationally known Christian preacher, teacher, apologist andauthor. He has written 30 books, including two of Britain's most widely used evangelistic
presentations, Right With God and the booklet Ultimate Questions. The latter has over fourteen million copies in print in about 60 languages.
Dr. Blanchard is now heavily committed to Popular Christian Apologetics, a project involving writing, speaking, teaching and broadcasting in defense of the Christian faith.

Traces the development of atheistic and agnostic thinking from the ‘Golden Age' of Greek philosophy to the present day. Pinpoints the influence of thinkers such as Immanuel Kant, Friedrich Neitzsche, Martin Heidegger, Albert Camus, Jean-Paul Sartre and Bertrand Russell, and shows how their teaching has helped to shape modern atheistic and agnostic ideas. Traces the rise of Darwinian evolutionism and uncovers the weaknesses in claims made by its contemporary exponents such as Richard Dawkins and Peter Atkins. Exposes the fallacies of determinism, existentialism and secular humanism. Highlights the fundamental flaws in nine world religions and fourteen major cults. Shows why true science and true religion are not enemies, but friends. Examines the critical issue of how a God of love can allow suffering and evil.

In this book, Blanchard gives a fascinating tour of his view of the origins and history of atheistic thought in areas of philosophy, science, religion, etc., at the same time exposing their major weaknesses. He then leads the reader to the evangelical Christian view of theism, including major arguments for and against it.
I found this book a most refreshing and interesting read, despite the difficulty of many of the subjects covered. It is rare to find philosophical arguments put forth in an easy-to-comprehend manner, and Blanchard did it brilliantly. His excellent coverage of technical and scientific issues were also easily grasped and understood by a layman.
The approach of the book requires that the reader read it like a novel -- from start to finish. And the best thing is that it was so engaging that it did read like a novel (for me at least)! It was quite hard to put it down. Since this book is not meant as a pure reference book (IMO) where you jump to a particular topic and draw conclusions from there (unless you've already read the whole book previously), one can safely ignore the reviews from those who haven't read it from start to finish.
The only flaw in this diamond is that a number of the author's arguments presented are not watertight or conclusive. Many of the arguments are based on probability and likelihood (which he readily admits), which are not enough convince the dedicated atheist, although enough to sway a sufficiently reasonable and open-minded person. Perhaps I'm being too nitpicky by giving only 4 stars :)
That said, I find that this is still an excellent book, made even better by its readability. Any one interested in Christian apologetics MUST read this.