Dealing with Dawkins by John Blanchard 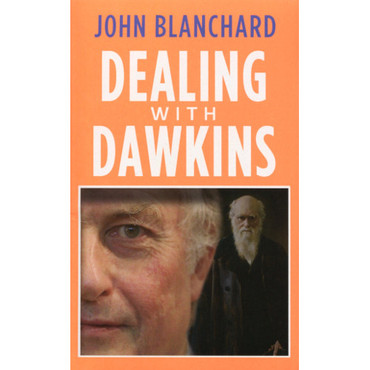 Dealing with Dawkins by John Blanchard

John Blanchard has produced yet another winner in Dealing with dawkins This time he engages with the so-called "new atheism" promoted by Richard Dawkins in his books The God Delusion and The Greatest Show on Earth. Blanchard concisely but clearly outlines Dawkins' views and arguments, and deftly demonstrates how shallow and illogical they often are, then provides God-centred alternatives that are altogether superior.

Blanchard tackles such subjects as the importance but limitations of science, the origin and significance of morality and Dawkins' abysmal ignorance of theology and the Bible. He then goes on to explain the nature of true faith before ending with a clear presentation of the gospel of Jesus Christ.

Perfect for our sceptical times, this book will demonstrate to any open-minded reader that, contrary to Dawkins' atheistic claims, biblical Christianity is reliable and relevant, powerful and persuasive.

Dr. John Blanchard is an internationally known Christian preacher, teacher, apologist and author. He has written 30 books, including two of Britain's most widely used evangelistic presentations, Right With God and the booklet Ultimate Questions. The latter has over fourteen million copies in print in about 60 languages. His major book Does God believe in Atheists?, published in 2000, was voted 'Best Christian Book' in the 2001 UK Christian Book Awards, and immediately became a best-seller, described as 'a brilliant defense of belief in God'.
More recent books include The Hitch-hikers Guide to Heaven and Why are you here?

Blanchard goes point-for-point in answering Dawkins' objections to the world-view that God exists, that the gospel of Christ is amenable to reasoned thought, and that despite some anomalous incidents and activities in history Christ and His followers have done the world immeasurable good.

The God of the Bible, by the revelation He has given to humankind, has given us true knowledge of ourselves and our world (including the spiritual dimension), without which we would lack full understanding of it. As Blanchard also makes clear, God, through His Son, the Lord Jesus Christ, has graciously provided a way of escape from a horrific peril we humans face, that being the ruination of our nature through sin (breaking the laws of life and love), at great cost to Himself. In this He has provided forgiveness of sin and cleansing from it, and eternal life in a sinless and pristine world that He shall bring forth after the day of judgment.

Not all women and men have faith, and some ridicule those who do, but Blanchard in this little book (less than 100 small pages) gives very good answers to Dawkins' opinions, such that enable a defense of the faith to those who use *The God Delusion* to attack them. Brevity and depth are strong points of *Dealing with Dawkins*.

Blanchard shows that the gospel of Christ is historically verifiable, intellectually sound, and of supreme spiritual importance -- indeed, life-or-death important, seeing that Jesus died for sinners, in their place, that all who trust Him should not be condemned, but made righteous in God's eyes by faith. Highly recommended - Steve R.