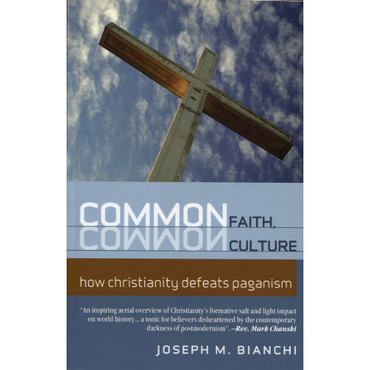 "Joseph M. Bianchi has provided an inspiring aerial overview of Christianity's formative salt and light impact on world history. 'it is a culture that transforms societies by transforming people one by one.' Bianchi provides a tonic for believers disheartened by the contemporary darkness of encroaching postmodernism. Surely the gates of Hell will not prevail, for in Christ, we will triumph as more than conquerors. Well done!" -Rev. Mark Chanski, Pastor of The Reformed Baptist Church of Holland, MI, conference speaker and author of the popular book "Manly Dominion."

"Joseph Bianchi presents an historical overview of culture with one intent: To demonstrate that Christianity is superior in every way to its pagan counterpart and has a powerful effect on the same. He succeeds, because Christianity succeeds. Find comfort and challenge in this compelling treatise." - Jim Elliff, Christian Communicators Worldwide, Kansas City, Missouri

"In academic and non-academic circles the nature, influence, importance and development of culture is often discussed. Almost everyone recognizes the power that what is called culture has in the lives of individuals in both positive and negative ways. The question about what is the most productive and beneficial culture is hotly debated. In this book, Joseph M. Bianchi 'asserts with boldness that there is one overriding and superior culture in the world.' In so doing, he contrasts the pagan (unbiblical) concepts of culture with the biblical perspective. In the book, Mr. Bianchi makes the claim 'that Christianity transforms all other cultures for the good; that it has freed more people spiritually, intellectually, emotionally, and even literally, than any other movement in history.' And he not only makes this claim, he also powerfully backs it up with solid evidence that this is so. I commend this book to you and encourage you to buy it and then read it through at least twice and share it with others." -Dr. Wayne Mack, Pastor, Biblical Counselor, Conference speaker and author of "Your Family God's Way", "Strengthening Your Marriage", "Anger and Stress Management", and a host of other well known books.

Joseph M. Bianchi (M.Div., Yale University) spent many years as a journalist prior to his ordination. He has written on topics as varied as urban planning and Constitutional Law. His other books include God Chose to Save, 21st century Corinthians and My Friend Grace.

Joseph M. Bianchi spent many years as a journalist before his ordination. His other books include 21st Century Corinthians, God Chose to Save, and My Friend Grace. He has written on a wide variety of subjects including constitutional law and urban planning