Christian Leaders of the 18th Century 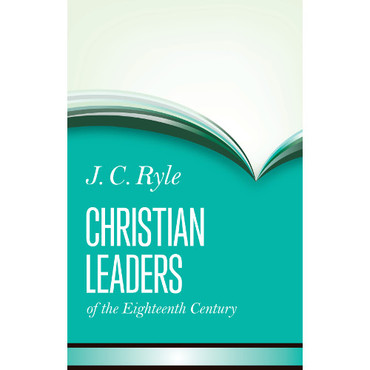 Christian Leaders of the 18th Century

Although much has been written on the evangelical revival of the 18th century, J. C. Ryle’s Christian Leaders of the 18th Century remains the best popular introduction to this great spiritual era. With simplicity and vigour, he traces the lives of the eleven Christian leaders who ‘shook England from one end to another’, giving strong reasons for his belief ‘that excepting Luther and his Continental contemporaries, and our own martyred Reformers, the world has seen no such men since the days of the apostles.’

But Ryle does not write to prompt admiration, and his conclusions and applications of his subject are among the most forceful that ever came from his pen. ‘I am obliged to say plainly that, in my judgment, we have among us neither the men nor the doctrines of the days gone by…Once let the evangelical ministry return to the ways of the 18th century, and I firmly believe we should have as much success as before. We are where we are, because we have come short of our fathers.’

At the beginning of last century, Canon A. M. W. Christopher of St. Aldate’s, Oxford, declared that he had turned to Ryle’s book during every summer vacation for thirty years. It is time Christian Leaders of the 18th Century was so read again.

John Charles Ryle was born of well-to-do parents at Macclesfield on 10 May 1816. After a period of private schooling, he entered Eton in February 1828, where he excelled at rowing and cricket. Going up to Christ Church, Oxford in October 1834, he continued his sporting prowess, and captained the First Eleven in his second and third years, achieving a personal 10-wicket bowling triumph in the 1836 Varsity match at Lords (which Oxford won by 121 runs).

Various circumstances and incidents in his own and others’ lives had awakened Ryle to the knowledge that all was not well with his soul, but matters came to a head not long before he took his Finals in 1837. He was struck down with a serious chest infection, and for the first time in fourteen years he turned to his Bible and prayer. Then one Sunday, arriving late to church he was in time to hear the reading of Ephesians chapter two. As he listened, he felt that the Lord was speaking directly to his soul. His eyes were opened when he heard verse 8, ‘For by grace are ye saved through faith; and that not of yourselves: it is the gift of God.’ He was converted through hearing the Word of God, without comment or sermon.

Ryle took a first in Classics, but turned down the college fellowship which was offered. His intention was a career in politics, and he went to London to study law, thinking this would be a help to him. However, he had to give this up after six months due to a recurrence of his chest problems, caused by the London smog. When his father’s bank crashed in 1841, Ryle had to give up all hope of a political career, as he now had no money behind him.

With his Oxford degree, Ryle could enter the ministry of the Church of England, and it was to this he turned, being ordained by Charles Sumner, Bishop of Winchester on 21st December 1841. Long afterwards Ryle wrote, ‘I have not the least doubt, it was all for the best. If I had not been ruined, I should never have been a clergyman, never have preached a sermon, or written a tract or book.’

Ryle started his ministry as curate at the Chapel of Ease in Exbury, Hampshire, moving on to become rector of St Thomas’s, Winchester in 1843 and then rector of Helmingham, Suffolk the following year. While at Helmingham he married and was widowed twice. He began publishing popular tracts, and Matthew, Mark and Luke of his series of Expository Thoughts on the Gospels were published in successive years (1856-1858). His final parish was Stradbroke, also in Suffolk, where he moved in 1861, and it was as vicar of All Saints that he became known nationally for his straightforward preaching and firm defence of evangelical principles. He wrote several well-known and still-in-print books, often addressing issues of contemporary relevance for the Church from a biblical standpoint. He completed his Expository Thoughts on the Gospels while at Stradbroke, with his work on the Gospel of John (1869). His third marriage, to Henrietta Amelia Clowes in 1861, lasted until her death in 1889.

After a period as honorary canon of Norwich (1872), in 1880 Ryle became the first bishop of Liverpool, at the recommendation of Prime Minister Benjamin Disraeli. His episcopate was marked by his efforts to build churches and mission halls to reach the rapidly expanding urban areas of the city. He retired in 1900 at age 83 and died later the same year in Lowestoft. His successor in Liverpool described him as ‘the man of granite with the heart of a child.’