Christ Set Forth: As the Cause of Justification and As the Source of Justifying Faith 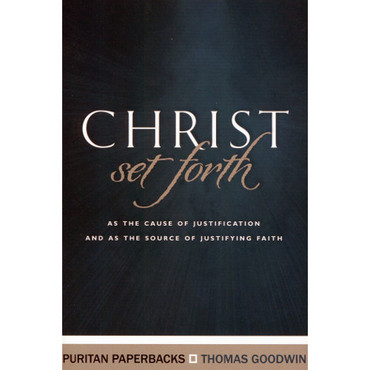 Christ Set Forth: As the Cause of Justification and As the Source of Justifying Faith

First published in 1642, Christ Set Forth — one of Thomas Goodwin’s most beloved and enduring works — is a book full of theological riches and penetrating pastoral insights. Addressing, from an exposition of Romans 8:34, the pastoral problem that many believers stray in their faith by looking into their own hearts for signs of grace instead of looking away from themselves to Christ, Christ Set Forth is primarily a book written to encourage Christians. As Scott Berggren says in the Foreword,

It is a guidebook for keeping one’s heart and faith pointed in the right direction, towards Christ himself. In it Goodwin pushes aside anything that might displace Christ in one’s heart. In chapter after chapter he sets forth the glory of Christ and his work as mediator as the only object of one’s faith and affection.

Thomas Goodwin was born in 1600 in the small village of Rollesby in Norfolk. His parents were God-fearing, and at that time the Norfolk Broads were well-soaked in Puritanism, so unsurprisingly he grew up somewhat religious. That all wore off, though, when he went up to Cambridge as a student. There he divided his time between ‘making merry’ and setting out to become a celebrity preacher. He wanted, he later said, to be known as one of ‘the great wits’ of the pulpit, for his ‘master-lust’ was the love of applause.

Then in 1620—having just been appointed a fellow of Katharine Hall—he heard a funeral sermon that actually moved him, making him deeply concerned for his spiritual state. It started seven grim years of moody introspection as he grubbed around inside himself for signs of grace. Only when he was told to look outwards—not to trust to anything in himself, but to rest on Christ alone—only then was he free.

Soon afterwards he took over from Richard Sibbes’ preaching at Holy Trinity Church. It was an appropriate transition, for while in his navel-gazing days his preaching had been mostly about battering consciences, his appreciation of Christ’s free grace now made him a Christ-centred preacher like Sibbes. Sibbes once told him ‘Young man, if ever you would do good, you must preach the gospel and the free grace of God in Christ Jesus’—and that is just what Goodwin now did. And, like Sibbes, he became an affable preacher. He wouldn’t use his intellectual abilities to patronise his listeners, but to help them. Still today, reading his sermons, it is as if he takes you by the shoulder and walks with you like a brother.

All the while, Archbishop Laud was pressing clergy towards his own ‘high church’ practices. By 1634, Goodwin had had enough: he resigned his post and left Cambridge to become a Separatist preacher. By the end of the decade he was with other Nonconformist exiles in Holland. Then, in 1641, Parliament invited all such Nonconformists to return, and soon Goodwin was leading the ‘dissenting brethren’ at the Westminster Assembly.

‘Dissenting’, ‘Separatist’: it would be easy to see Goodwin as prickly and quarrelsome. In actual fact, though, while he was definite in his views on the church, he was quite extraordinarily charitable to those he disagreed with, and managed to command widespread respect across the theological spectrum of the church. Almost uniquely, in an age of constant and often bitter debate, nobody seems to have spoken ill of Goodwin.

If there was a contemporary Goodwin overlapped with more than any other, it was John Owen. In the Puritan heyday of the 1650s, when Owen was Vice-Chancellor of Oxford University, Goodwin was President of Magdalen College. For years they shared a Sunday afternoon pulpit, both were chaplains to Cromwell, together they would co-author the Savoy Declaration.

And both had their own sartorial whimsies: Owen was known for his dandy day-wear, his snake-bands and fancy boots; Goodwin, it was giggled, had such a fondness for nightcaps that he is said to have worn whole collections on his head at once. First and foremost, Goodwin was a pastor at heart. Students at Magdalen College soon found that, should they bump into Goodwin or his nightcaps, they could expect to be asked when they were converted or how they stood with the Lord. And when Charles II returned in 1660 and Goodwin was deprived of his post, it was to pastor a church in London that he went.

The last twenty years of his life he spent pastoring, writing treatises, and studying in London (the study sadly interrupted in 1666 when the Great Fire burned more than half of his voluminous library). Then, at eighty years of age, he was gripped by a fatal fever. With his dying words he captured what had always been his chief concerns: ‘I am going’, he said,

to the three Persons, with whom I have had communion . . . My bow abides in strength. Is Christ divided? No, I have the whole of his righteousness; I am found in him, not having my own righteousness, which is of the law, but the righteousness which is of God, which is by faith of Jesus Christ, who loved me, and gave himself for me. Christ cannot love me better than he doth. I think I cannot love Christ better than I do; I am swallowed up in God . . . Now I shall be ever with the Lord.