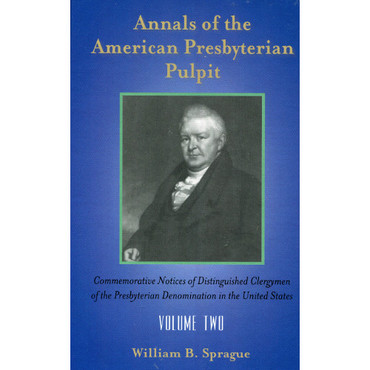 These volumes trace the Presbyterian Pulpit from the earliest days of the country until the early 1860's. This three volume hardcover set is very difficult to find and you can purchase all three volumes for less than you could purchase one volume from antiquarian sellers.

"The value of Sprague's Annals of the American Pulpit cannot be overstated. Here is a rich hoard of biography, church history, and best of all, specimens of the preaching of the early generations of America's Presbyterian and Reformed ministers, who exercised a degree of influence over the life of our nation unsurpassed and seldom equalled by any who came after them. No accurate or profound understanding of what Presbyterianism was down to the middle decades of the 19th century, or the place it filled in American life, is possible without consulting the Annals. Every Christian will derive great profit as well from reading the biographical sketches of these highly educated, gifted and devout men of God." - Rev. Ray B. Lanning, Associate Reformed Church of Grand Rapids, MI

"Sprague's 'Annals of the American Pulpit' was one of the most useful reference works of the nineteenth century. By recording, often from personal acquaintances, key information about a wide range of clergymen in early American history, Sprague made it possible to peer much further into the day-by-day lives of the churches. This reprinting of the volumes dealing with Presbyterian ministers should be welcome to all students of early American history, but especially by those who desire a sense of how religious life 'on the ground' was carried out." Mark A. Noll, Professor of History, Wheaton College (IL)

"Annals of the Presbyterian Pulpit is a unique, sterling encyclopedia of Presbyterian preachers by a great historian that not only provides valuable biographical summaries of well-known preachers, but, most importantly, offers a gold mine of information on less known luminaries long forgotten in the annals of church history."- Joel R. Beeke, Puritan Reformed Theological Seminary

OVER 2200 PAGES OF RARE BIOGRAPHICAL SKETCHES