An Exposition of Second Peter by Thomas Adams (Hardcover) 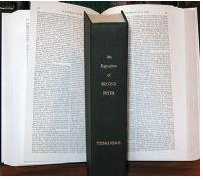 An Exposition of Second Peter by Thomas Adams (Hardcover)

Thomas Adams (1583-1652) was a powerful preacher, a much-quoted writer, and an influential divine. Prominent leaders in church and state, such as John Donne and the earl of Pembroke, were among his friends. Adams sermons have been admired since their first printing; the 'placed him beyond all comparison in the van of the preachers of England, and had something to do with shaping John Bunyan. His numerous works display great learning, classical and patristic. And are unique in their abundance of stories, anecdotes, aphorisms, and puns' (Encyclopedia Britannica, 11th edition). Alexander B. Grosart wrote of him: "Thomas Adams stands in the forefront of our great English preachers. He is not as sustained as Jeremy Taylor, nor so continuously sparkling as Thomas Fuller, but he is surpassingly eloquent and brilliant, and much more thought-laden than either."