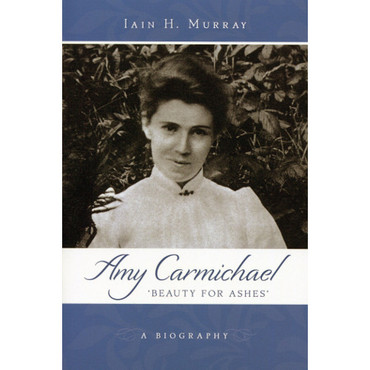 Amy Carmichael (1867-1951) was a missionary and author who spent over fifty years of her life — without returning home — serving mainly low caste girls and boys in South India. Iain Murray’s concise biography provides an enlightening and moving account of her remarkable life and love for her Saviour, as well as perceptively drawing lessons from it.

Iain Hamish Murray, born in Lancashire, England, in 1931, was educated at Wallasey Grammar School and King William’s College in the Isle of Man (1945-49). He was converted in 1949 through the ministry at Hildenborough Hall, Tom and Jean Rees’ Christian conference centre in Kent. It was at Hildenborough later that same year that he first met Jean Ann Walters, who was to become his wife (they married in Edgeware on April 23, 1955).

After service with the Cameronians in Singapore and Malaya, he read Philosophy and History at the University of Durham with a view to the ministry of the English Presbyterian Church (his parents’ denomination). It was at Durham that he began to read the Puritans, whose writings were to become a lifelong passion. After a year of private study, he assisted Sidney Norton at St John’s Free Church, Oxford, in 1955–56, and it was here that The Banner of Truth magazine was launched, with Murray as its first editor.

From 1956 he was for three years assistant to Dr Lloyd-Jones at Westminster Chapel and there, with the late Jack Cullum, founded the Banner of Truth Trust in 1957. He left Westminster in 1961 for a nine-year pastorate at Grove Chapel, Camberwell. With the world-wide expansion of the Trust, Iain Murray became engaged full-time in its ministry from 1969 until 1981 when he responded to a call from St Giles Presbyterian Church, Sydney, Australia. Now based again in the UK, he and Jean live in Edinburgh. He has written many titles published by the Trust, in whose work he remains active. He is still writing.

‘This is a love story of the noblest kind. It is an enriching consideration of a woman’s relentless love for her Saviour, her Bible, her friends, and most uniquely, her love for lost, suffering and desperate sinners – to whom she gave her life. Such devotion as hers seems so distant. Reading this brief history will confront and help to close that distance.’ — JOHN MACARTHUR

‘Iain Murray has written a superb account of this remarkable woman’s life . . . He has read her books and her poetry, and what he writes reveals a keen understanding of the motives and undertakings of an extraordinary woman. It warmed my heart and informed my mind . . . I cannot too enthusiastically recommend this book.’ — IAN S. BARTER