A Tender Lion: The Life, Ministry, and Message of J.C. Ryle 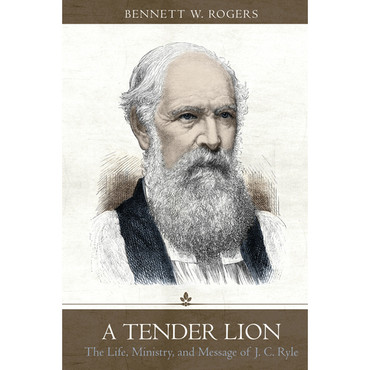 A Tender Lion: The Life, Ministry, and Message of J.C. Ryle

John Charles Ryle became the undisputed leader and spokesman of the evangelical party within the Church of England in the last half of the nineteenth century, and his works continue to be read by evangelicals of various denominational stripes more than a century after his death. Accordingly, he is often portrayed as "an old soldier" of a heroic cause. While this view of Ryle holds some merit, it often obscures the complexity and dynamism of a most remarkable man.

In this intellectual biography, Bennett Wade Rogers analyzes the complicated life and times of a man variously described as traditional, moderate, and even radical during his fifty-eight-year ministry. Ryle began his ministerial career as a rural parish priest; he ended it as a bishop of the second city of the British Empire. In the time between, he became a popular preacher, influential author, effective controversialist, recognized party leader, stalwart church defender, and radical church reformer.

Bennett Wade Rogers (PhD, The Southern Baptist Theological Seminary) is a pastor and teacher in Mississippi and has written several articles on J. C. Ryle and John Bunyan.

"Bennett Wade Rogers has put us in his debt with this splendid up-to-date intellectual biography of the great Victorian evangelical, J.C. Ryle. He paints a compelling and sympathetic portrait of Ryle in his historical context, so that his eccentricities and his intentions become clearer at every stage of his ministry. He helps us understand Ryle's hugely significant contributions to the church (his preaching, his publishing, his episcopal leadership), with some particularly insightful analysis of the lesser-known aspects of his work such as his hymnbooks and his profound involvement with the Church Association in campaigning for the reform of the Church of England, which helped strengthen and preserve Anglican Evangelicalism into the next century. This is an inspiring and edifying book about someone who was extraordinarily useful to his Master."

“J. C. Ryle is to Anglican evangelicals as C. H. Spurgeon is to Baptist evangelicals. The lives of great servants of God deserve our careful study to understand the trajectory from which we have come, to remove the cultural blinders of living in the present, and to find exemplars of gospel ministry, that we may imitate their faith. Bennett Rogers has done us all a great favor by writing this book on J. C. Ryle with detailed scholarship and eminently readable prose.”

“When I was in my twenties, I discovered that J. C. Ryle’s Daily Readings so revolutionized my quiet times that when I visited Ryle’s tomb in Liverpool Cathedral, I found myself in tears. So it was a delight to read the backstory of this godly bishop whose timeless commentaries on the four Gospels had been such an inspiration. In A Tender Lion by Bennett Wade Rogers, I found lessons on page after page from the bishop who gave us Holiness.”

“From the standpoint of the history of evangelicalism, the ministry of J. C. Ryle is of utmost significance. In a day when the tide was beginning to turn against the convictions and worldview of evangelicals, Ryle stood firm as a rock for the heart and basics of the gospel. His life, along with those of a number of other nineteenth-century saints (like the Bonars and Spurgeon), is of great encouragement to us in our day when times in the West are even more desperate. Warmly recommended.”

—-Michael A. G. Haykin, professor of church history at the Southern Baptist Theological Society and a fellow of the Royal Historical Society

“I am so thankful for Bennett W. Rogers’s A Tender Lion: The Life, Ministry, and Message of J. C. Ryle. When I was a teenager, Ryle’s Holinesscame into my hands. I have been a Ryle fan ever since. In my work as a pastor, Ryle’s Expository Thoughts on the Gospels were a companion to me as well as a constant source of devotion and application as I preached through Matthew, Luke, and John. This book introduces the reader to the man behind a writing ministry that lives on over a century later. I commend it warmly.”