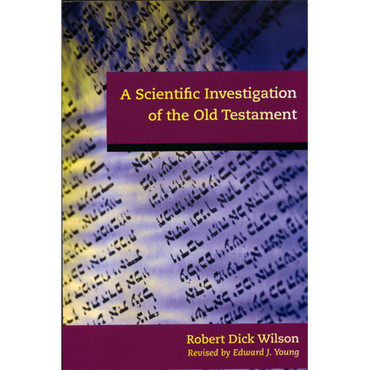 Wilson was professor of Semitic languages and Old Testament at Princeton Theological Seminary from 1900 to 1929.

"Occasionally God gives to His Church a man of unusual gifts, deep piety, and true insight. Such a man was the late Robert Dick Wilson (1856-1930). Dr. Wilson lived at a time when the Old Testament was being subjected to some of the severest attacks and criticisms that it had ever received. He himself was a devout Christian and grieved over these attacks. He also had an insight into their nature and into the need for refuting them. And he had the God-given ability for standing up to the challenge which these attacks constituted, accepting it and seeking to give an answer." —from Introduction by E.J. Young "Robert Dick Wilson was a tireless advocate of the authority, integrity, and accuracy of the Old Testament. Teachers and students alike find in his pious and scholarly life a model to emulate. In a time of unprecedented attacks on the Word of God, he was truly valiant for the truth. God help the generation in which the church does not have such a champion of Scripture." —Dr. William D. Barrick, Professor of Old Testament, The Master's Seminary "A Scientific Investigation of the Old Testament is a work in which the results of Dr. Wilson's studies are presented. Almost every statement in the book is based upon long and patient research. For this reason the book may be a bit difficult to read. Its reading, however, will be amply rewarding to the man who wishes to understand how strong is that evidence which corroborates the Old Testament. Only one who has done similar work himself can appreciate the tremendous amount of toil which the following pages represent. But anyone who will read these pages carefully will soon come to see that the Old Testament is capable of scholarly defense and that Robert Dick Wilson was one of its most scholarly defenders. Because of his painstaking research many have been strengthened in their faith and many ministers have preached with greater earnestness and devotion than would otherwise have been the case. May the triune God be praised for having given to His people so great a warrior as Robert Dick Wilson." — E.J. Young "Build solidly. Prepare thoroughly. Never be satisfied with superficial answers. God's Word can stand the most thorough investigation. Do not shirk the difficult problems but seek to bring the facts to light, for God's Word and God's world will never contradict one another." — Oswald T. Allis, describing Robert Dick Wilson's approach to the study of the Bible

In 1856, a unique and godly man by the name of Robert Dick Wilson was born. As a student, he decided to plan out his entire life and determined to spend 15 years in the study of languages, 15 years more in the study of the Old Testament text with regard to those languages, and a final 15 years in publishing his findings. Wilson eventually mastered 45 languages and dialects and read with ease from ancient manuscripts. He compiled over 100,000 quotations from these various languages in order to illustrate and publish writings about the accuracy of the Old Testament. He had this to say about the Old Testament, "...we have it with sufficient accuracy to be reliable as evidence on all great questions of doctrine, law, and history." And again quoting Wilson: "The results of those 30 years' study which I have given to the text has been this: I can affirm that there's not a page of the Old Testament in which we need have any doubt. We can be absolutely certain that substantially we have the text of the Old Testament that Christ and the Apostles had and which was in existence from the beginning."

This book is the result of some of his learning on the text, grammar, vocabulary, and history of the ancient texts. In this short volume, Wilson builds an extremely good case, that is basically irrefutable, that the Old Testament Masoretic Text is true to an extremely high level of confidence. He also does an excellent job refuting the textual critics. This book is a must for any scholar and for any Christian seeking the truth.