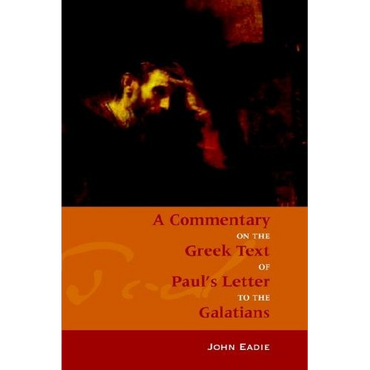 "Everything that John Eadie wrote is pure gold. He was simply the best exegete of his generation. His commentaries on Paul's epistles are valued highly by careful expositors. The only regret the purchaser of these volumes will have is that Eadie did not write commentaries on the rest of the Bible. Solid Ground Christian Books has done a great service by bringing Eadie's works back into print." - Dr. Robert P. Martin According to the New Schaff-Herzog Enclyclopedia of Religious Knowledge, "These commentaries of John Eadie arew marked by candor and clearness as well as by an evangelical unction not common in works of the kind." John Eadie (1810-1876) was a prominent Scottish Seccession and United Presbyterian Church minister and New Testament scholar. He was appointed Professor of Biblical Literature in the United Presbyterian Divinity Hall in 1843. His widely acclaimed commentaries on Paul's epistles prompted his appointment to the New Testament committee engaged in preparing the Revised Version of the Bible in English.