A Body of Divinity: Being the Sum and Substance of the Christian Religion 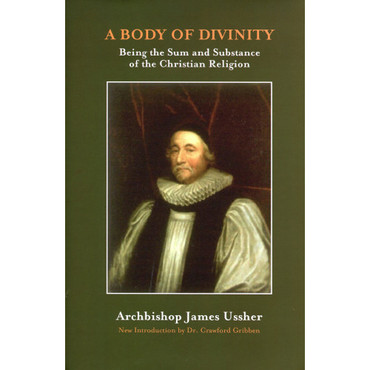 A Body of Divinity: Being the Sum and Substance of the Christian Religion

"Archbishop James Ussher (1581-1656) was a leader par excellence among the Irish Puritans. His colorful history is inseparable from that of Irish Christianity and from major events transpiring simultaneously in England and Scotland. Ussher's range of achievements are outstanding, including ancient languages, patristics, ancient and Irish history, theology, and chronology. Though he is best known for his biblical chronology, I believe that his Body of Divinity is his most valuable legacy. This volume, long overdue to be reprinted, was once regarded as a classic in the field of Reformed systematic theology and deserves to be so regarded again. Here is pristine Irish Puritan theology, presented to us in a captivating question and answer format." --Joel R. Beeke, Puritan Reformed Theological Seminary, Grand Rapids, Michigan

"Raised in a Bible-believing Calvinistic environment, Dr. Ussher soaked himself in the Holy Scriptures without ceasing. He also read the Early Church Fathers - systematically, every day, for eighteen years. Head of Ireland's foremost Theological Faculty, Ussher was internationally the greatest Anglican antiquarian and theologian of his age - if not of all time." -Dr. Francis Nigel Lee, Professor-Emeritus of the Queensland Presbyterian Theological College

"Among those volumes that are most useful for understanding British Reformed theology of the 17th century and especially that of the Westminster Assembly few are as valuable and therefore welcome in republication as Ussher's Body of Divinity." -R. Scott Clark, D.Phil., Associate Professor of Historical and Systematic Theology, Westminster Seminary California

"Archbishop Ussher remains a theological giant upon whose shoulders many Reformed believers have unknowingly stood. Ussher penned the Irish Articles published in 1615. The terms and theology of that confession are found in the Westminster family of confessions. Westminsterian Presbyterians, Congregationalists who look to the Savoy Declaration and confessional Reformed Baptists all owe their theological heritage to Ussher, humanly speaking. Publishing the The Body of Divinity will help many in our generation to recover or reaffirm the faith of the Reformation--the greatest revival of true religion ever." - Dr. Mike Renihan, Heritage Baptist Church, Worcester, MA

Archbishop James Ussher (1581-1656), author of the newly reprinted "Annals of the World," wrote his Body of Divinity in a way that would make it useful to the family. Long out of print, used copies regularly bring $400.00 and more on the used market. This edition is newly typeset and has a new Introduction by Dr. Crawford Gribben and a complete Bibliography on Ussher make this the most valuable edition ever produced.

THE HEADS OF THE BODY OF DIVINITY