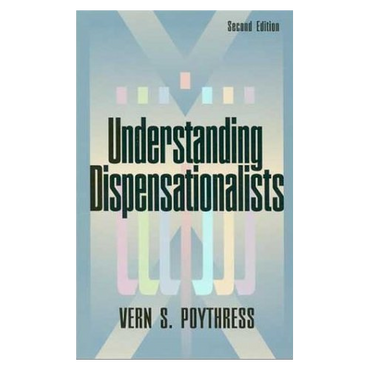 Vern S. Poythress (MLitt, University of Cambridge; PhD, Harvard University; DTh, University of Stellenbosch, South Africa) is Professor of New Testament Interpretation at Westminster Theological Seminary in Philadelphia. He is also the author of Understanding Dispensationalists; Science and Hermeneutics; Implications of Scientific Method for Biblical Interpretation;Symphonic Theology; The Validity of Multiple Perspectives in Theology; and The Shadow of Christ in the Law of Moses.

Endorsement
There is no doubt that Dispensationalism is fatally flawed, but Poythress manages to avoid any nasty confontational language and attitudes towards those who hold this belief.
Giving credence to his thesis is the fact that he spent time at Dallas Theological Seminary doing research for the book. In fact, he thanks the staff and students for their help! Given the often dogmatic and unloving attitudes that persist on both sides of the interpretive divide, Poythress is very effective and genuine in his style.
Poythress has a number of arguments against Dispensationalism that can't all be summarised here. He does, however, point out that Dispensationalists often paint themselves into corners - they believe the Bible is the literal word of God (which Poythress believes as well), but are unable to cope with basic exegetical problems that contradict their theology. Rather than allow their theology to be changed by the Bible, they interpret the Bible via their theology - thus removing a central part of their belief system that the Bible determines theology.
I challenge any Dispensationalist to read Poythress' work and still remain committed to their theology. But, like Poythress, I do this in the spirit of love, recognizing their faith and love of Christ.