For The Love of India by Jim Cromarty (Paperback) 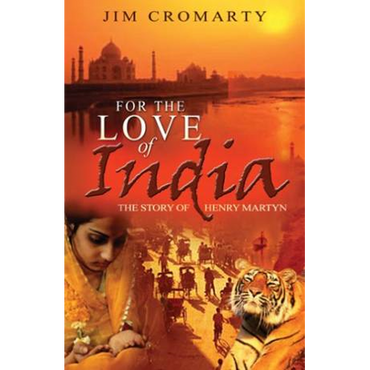 For The Love of India by Jim Cromarty (Paperback)

In the summer of 1805, at the height of the struggle for naval supremacy between Britain and France that was to culminate in the Battle of Trafalgar, a young man, newly ordained to the ministry of the Church of England and already showing symptoms of the tuberculosis which had claimed the life of his mother, set sail on the long and hazardous voyage to India. Leaving behind friends, family and the woman he loved, he turned his back on the prospects of a brilliant academic career in England, in order to bring the gospel of the Lord Jesus Christ and the Word of God in their own language to the peoples of India and Persia. His name was Henry Martyn. Struggling against the rigours of a climate which was seriously undermining his health, and facing scorn and hostility from many quarters, within the space of a few short years he completed the translation of the New Testament into Hindustani, Persian and Arabic, opened several schools and brought the message of the gospel, by either the spoken or the written word, to people from all levels of society, from the beggars who came to his gate to the court of the Shah of Persia.

In the summer of 1805 a young man set sail on the long, perilous journey to India. He left friends, family and prospects behind in order to serve as a missionary in a foreign land. Already suffering the tuberculosis, the disease that had claimed the life of his mother and would soon also claim his two sisters, he forsook the prospects of a comfortable life as a minister or scholar and travelled to the far side of the world. He did so for the love of India, for the love of the gospel and ultimately for the love of God.

Henry Martyn was a brilliant scholar who studied at Cambridge and won the coveted title of Senior Wrangler which was bestowed upon the student who won the Cambridge University annual mathematics problem-solving competition, and was thus recognized as the University's best undergraduate mathematician. While he was a brilliant mathematician, he also had a natural proclivity for languages. After his conversion as a young man his mentor Charles Simeon encouraged him to abandon his intention of becoming a lawyer and to dedicate his life to serving God as a missionary. Martyn was subsequently ordained in the Church of England and travelled to India as a chaplain of the East India Company. He was to live only six years after arriving in India, but in that time he produced an incredible body of work. He translated the New Testament, the Anglican Prayer Book and the Anglican Marriage Service into Hindustani; he translated the parables for use in his schools; he also ensured that the Persian translation of the New Testament was the finest possible, translated the Psalms in Persian and oversaw the translation of the Arabic New Testament. This translations were ultimately printed and distributed in the tens of thousands.

While he is remembered primarily as a translator, Martyn was also a pastor and preached on a weekly basis. He desperately desired to see lives changed, yet in his ministry witnessed not a single conversion. While this often left him discouraged, he took refuge in knowing that he had preached the gospel and left the listener without excuse. After his death it was discovered that several people were converted through his ministry and we can only wait until eternity to discover how many were saved by the reading of the Scriptures he translated.

Throughout his ministry Martyn suffered from poor health and often terrible loneliness. He desperately loved a woman he had left behind in England and often wished that he had been able to marry her and enjoy her companionship. Yet he labored on, finding his joy and strength in the Lord.

Points to the glorious trophies that he won.

Eternal trophies! not with carnage red,

Not stained with tears by hapless captives shed,

But trophies of the Cross! for that dear name,

Through every form of danger, death, and shame,

Onward he journeyed to a happier shore,

Where danger, death, and shame assault no more.

It is fitting, perhaps, that the grave of Henry Martyn, a man who chose to live and die in obscurity, is nowhere to be found. The graveyard where he was laid to rest in Tokat has long since been destroyed in order to make way for building projects. Yet if one ventures to a nearby museum he will find the memorial stone that was erected over his grave many years after his death. The name has been defaced, but the inscription is still legible:

He laboured for many years in the East, striving to

Benefit mankind both in this work and that to come.

He translated the Holy Scriptures into Hindustani

And preached the God and Savior of whom they testify.

He will long be remembered in the East, where he was

Known as a man of God.

Henry Martyn is an inspiring figure who often reminded me of David Brainerd in his dedication, honesty, transparency and sacrifice. Like Brainerd he made a lasting, eternal impact in only a few short years. I thoroughly enjoyed reading <em>For the Love of India</em> and eagerly recommend it to you.