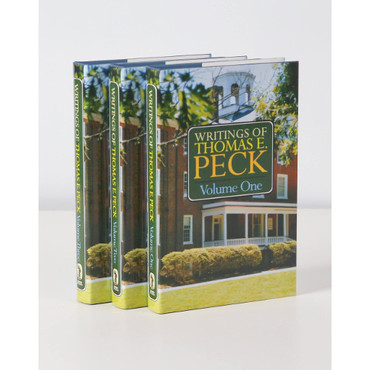 As a teacher, Peck was in the front rank. 'As an expositor of truth, as an exegete of Scripture,' his successor, C.R. Vaughan believed, 'he was probably without a rival in his day.' But it was not mere teachers that he labored to prepare for the gospel ministry but rather men 'with a tongue set on fire'. In this his own life was a constant example, possessed as he was with a moral conviction and a resolute fidelity to Scripture which 'sometimes puzzled the lovers of expediency'. Yet this was ever combined with a generous enthusiasm and warm affections. Devotion to principle is the only biblical remedy for our age of religious uncertainty and compromise. In these volumes, Peck's life work will be contnued in another generation.

Thomas Ephraim Peck was the eldest of the four children of Ephraim and Sarah (née Parke) Peck. He was born in Columbia, South Carolina in January 1822, and was just ten years old when his father died. He was brought up by his widowed mother in the home of her father, and graduated from South Carolina College at the age of eighteen.

It was at the College that he came under the saving power of the gospel through James Henley Thornwell, by whom he was prepared for the work of the Christian ministry. Such was Thornwell’s esteem for his pupil that, when he was delayed in taking up the pastorate of the important Second Church of Baltimore, he sent Peck, who was not yet twenty-four years old, to fill its pulpit in the meantime. Unexpectedly Thornwell was not released from Columbia and the Baltimore congregation was happy to appoint his deputy to the charge in 1846.

During his period there he edited with his friend, Dr Stuart Robinson, the Presbyterian Critic and Monthly Review (1855-56). For a longer period in later years he was to be an associate editor of the Southern Presbyterian Review.

In 1857, when Peck was expecting to move to Lynchburg, Virginia, the Baltimore Presbytery directed him to remain but to remove to the charge of the large Central Church left vacant by the departure of Stuart Robinson. Thus, Peck, much against his personal preferences, ‘assumed the care of a large and important field in the same city in which he had spent twelve years of discouraging work.’

Leaving Baltimore in 1860, Peck took up the great work of his life at Union Theological Seminary. By this time, when student numbers stood at thirty-nine, it was thought desirable to transfer R. L. Dabney to the chair of Theology, leaving Peck to take the chair of Church History. After the devastation of the Civil War, from which several of the students never returned, this same division of duties between Peck and Dabney continued until the latter’s removal to Texas in 1883. Thereafter, Peck succeeded Dabney as professor of Theology, and continued in that post through the last ten years of his life until his death at the age of seventy-one in 1893