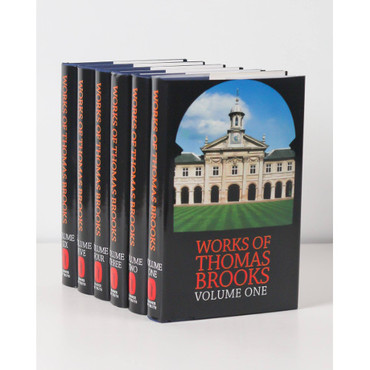 Brooks’ popularity lies both in his subjects – practical truths, central to the Christian life – and in the manner of his presentation. He is ever direct, urgent, fervent, full of Scripture and able to choose words which make his sentences as memorable as melodies.

Little is known about Thomas Brooks as a man, other than can be ascertained from his many writings. Born, probably of well-to-do parents, in 1608, Brooks entered Emmanuel College, Cambridge, in 1625. He was licensed as a preacher of the gospel by 1640 at the latest. Before that date he seems to have spent a number of years at sea, probably as a chaplain with the fleet. After the Civil War, Brooks became minister at Thomas Apostle’s, London, and was sufficiently renowned to be chosen as preacher before the House of Commons on 26 December, 1648. Three or four years later he moved to St Margaret’s, Fish-street Hill, London, but encountered considerable opposition as he refused baptism and the Lord’s Supper to those clearly ‘unworthy’ of such privileges. The following years were filled with written as well as spoken ministry. In 1662 he fell victim to the notorious Act of Uniformity, but he appears to have remained in his parish and to have preached the Word as opportunity offered. Treatises continued to flow from his agile pen. In 1677 or 1678 he married for the second time, ‘she spring-young, he winter-old’. Two years later he went home to his Lord.

I became a believer in Jesus Christ at 22, in 1966. Too lengthy to tell here and now (but surely there are many as me who never found a good, solid Reformed local assembly) & though we longed for being in a church as one like Martyn Lloyd-Jones, Iain Murray in the U.K or Australia when he was there…Albert Martin, Alistair Begg in Cleveland…you get the point I know.
The one thing that we all can have is our bibles first, reading them and praying, seeking God always…AND next to my bible in my life, the greatest thing(s) yet that have blessed me beyond what I can describe in all of the help to this old mind and heart that must struggle to the end with the “old man,”…the biggest help in spiritual matters is the books from Banner of Truth publishers, namely & you can begin with the “Works of Thomas Brooks,” which I have read and often re-read and pass on to others. Time does not permit me to mention others but Brooks is a good example of anything you will find at the “Trust.” It is very easy to read, just as the other Puritans and as easy to read as the last 2 modern Puritans I think we had (Spurgeon and Lloyd-Jones.)
So solidly rich in exposition of scripture and how my mind and heart have been blessed so much when reading Brooks. He has driven me to pray for holiness, weep for sin that plagues me, weep for joy too when he forever balances the great truths of God’s holiness alongside of His mercy and the timeless story of the cleansing blood of Jesus on that cross. No wonder that Spurgeon spoke constantly and even wrote his “Commenting and Commentaries” so to cover Brooks’ writings and the other giants of those days who read just as Brooks volumes do. Start anywhere with Brooks and you cannot go wrong. In volume one there is some of the things that were separate books (Satan and his devices, etc) but now put in the priceless 6 volume set. I have re-read & am often in vol 4 which is written on Hebrews 12:14 “Follow peace with all men, & holiness w/out which no man shall see the Lord.”
I have gone on and it would become a book itself to mention all of these precious volumes…but besides your bible, next to your bible have Brooks nearby. He will stir your heart and draw you to the Lord he loved so much. Oh, how grateful I am to Iain murray and MLJ, all who have been involved with Banner of Truth…eternity itself I suppose will only be able to show what this means the Lords given us has done…start out with even one volume or two of Brooks…Vol 1 & 4…then you will be raving about it as me. No one will then have to urge you on to Spurgeon, MLJ, Iain’s works, all of the golden nuggets. I never cease daily to pray for this work the Lord put upon the men who began this. — Wally Leitel