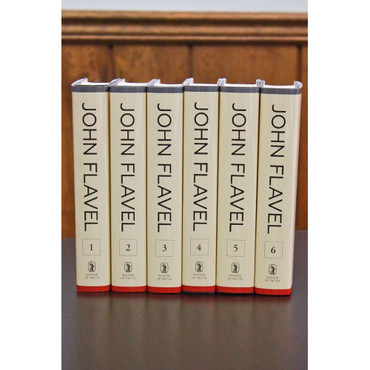 he repeated editions of Flavel’s Works bear their own witness to his popularity. He was a favourite with Jonathan Edwards and George Whitefield (who ranked him with John Bunyan and Matthew Henry), and, a century later, with such Scottish evangelical leaders as R. M. M’Cheyne and Andrew Bonar. Flavel’s complete works had long been unobtainable until we reprinted them in 1968. His six volumes are in themselves a library of the best Puritan divinity and a set will be a life-long treasure to those who possess it. He is one of that small number of evangelical writers who can by their lucidity and simplicity help those at the beginning of the Christian life and at the same time be a strong companion to those who near its end.

The eldest son of the Rev. Richard Flavel, John Flavel was born at Bromsgrove, Worcestershire, about 1628, and thus spent his childhood in the stormy years which led up to the Civil War in 1642. Following the defeat of the Royalist cause he ‘plied his studies hard’ as a commoner at University College, Oxford, and then, in 1650, entered the ministry to share in that sunny decade of spiritual reaping which preceded the restoration of Charles II.

Flavel’s life and work was carried on in the county of Devon, first in the country parish of Diptford and from 1656 in the thriving sea-port of Dartmouth. Through the last years of the Protectorate and until that August day in 1662 when about 120 ministers in Devon and approaching 1,800 in England as a whole were turned out of their livings for failing to comply with the terms of the Act of Uniformity, Flavel preached every week at Townstall, the mother-church which stood on the hill outside the town, and fortnightly at the Wednesday Lecture in Dartmouth.

Thereafter he took his place in the suffering ranks of the nonconformists and had a full share of the persecution which with greater or less intensity, and short intermissions, was to continue until James II fled the country in 1688. The repressive legislation which followed 1662, while it broke the evangelical ministry of England in a public sense, scattered Gospel light into new areas and led not infrequently to the use of strange pulpits. We hear of Flavel preaching at midnight in the great hall of a house at South Molton; on another occasion in a wood three miles from Exeter; and – the most colourful site of all (though it could not have been a comfortable one) – at Saltstone Rock, an island in the Salcombe Estuary which is submerged at high tide. But wherever Flavel was forced to wander he was never far from Dartmouth: ‘O that there were not a prayerless family in this town!’ was one of many petitions he offered for Dartmouth.

Taking advantage of the Indulgence given by Charles II in 1672 (for which he and 163 of his congregation wrote an address of thanks to the King) Flavel obtained licence for a Nonconformist meeting-house in the town, and, when this was withdrawn, he stayed at his post until the summer of 1682 when his person was in such danger that he took ship to London on July 10.

In London Flavel joined the congregation of his friend William Jenkyn and narrowly escaped arrest when the latter was seized in September 1684. Declining an invitation to succeed Jenkyn, Flavel again returned to Dartmouth where that same year he was burned in effigy by a mob – and, despite all hazards, maintained a ministry among his scattered flock until that November day in 1688 when the bells of Exeter, Plymouth, and no doubt of Dartmouth also, rang to welcome the coming of William of Orange – an event which led quickly to the flight of James II.

By the time of this ‘Glorious Revolution’ Flavel’s work was approaching its end. Speaking for his fellow-ministers he wrote, ‘We have long borne the burden and heat of the day; we are veteran soldiers almost worn out.’ While visiting Exeter in order to preach he died suddenly of a massive stroke on June 26, 1691, in his 64th year.

A very kind man (whom I’ve never met) purchased this collection for me as the result of an informal Twitter contest…little did he know, that the works of John Flavel would change my life forever. I can honestly say that Flavel’s writings have had the single greatest impact on my personal sanctification and growth in grace…and I owe it all to a stranger on Twitter. — Eric