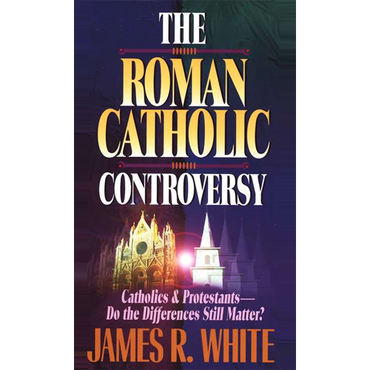 More than at any time in the past, Roman Catholics & evangelicals are working together. They are standing shoulder to shoulder against social evils. They are joining across denominational boundaries in renewal movements. And many evangelicals are finding the history, tradition, and grandeur of the Roman Catholic Church appealing. This newfound rapport has caused many evangelical leaders and laypeople to question the age-old disagreements that have divided Protestants and Catholics: Aren't we all saying the same thing in different language? The Roman Catholic Controversy is an absorbing look at current views of tradition and Scripture, the Papacy, the Mass, Purgatory, indulgences, and Marian doctrine. James White affirms that evangelicals and Catholics share common ground on some points. Yet there are crucial differences that remain regarding the Christian life—and the heart of the Gospel itself—that cannot be ignored.

James R. White is the author of several acclaimed books, including The King James Only Controversy and The Forgetten Trinity. He is an elder of the Phoenix Reformed Baptist Church, director of Alpha and Omega Ministries&#151a Christian apologetics organization, an adjunct professor with Golden Gate Baptist Theological Seminary, and a professor of apologetics with Columbia Evangelical Seminary. He and his family live in Phoenix.
Endorsement
James R. White is a justly famed Christian (Reformed Baptist) apologist, as well as the Director of "Alpha and Omega Ministries" in Arizona. He has written many other books, such as The Fatal Flaw, Mary--"Another Redeemer?, Answers to Catholic Claims, The Potter's Freedom, Debating Calvinism: Five Points, Two Views, Is the Mormon My Brother?, etc.

He wrote in the Preface to this 1996 book, "[this] work seeks to examine the central issues that separate Roman Catholics and Protestants... I firmly believe that ... there are many on both sides of this issue who are, perhaps unwittingly, sacrificing absolute truth on the altar of compromise and expediency... But for the person who wishes to ... approach the Roman Catholic/Protestant issue from a biblical perspective, the issue of TRUTH become central... it becomes quickly evident that Roman Catholics and Protestants disagree on the Gospel itself... This is not an exhaustive work. I have purposefully avoided many worthwhile areas of discussion to instead focus our attention on the CENTRAL issues." (Pg. 15-16)

He suggests, "Though it may seem surprising to some, in many aspects the Christian scholar of today is closer to the original writings of the Apostles than people who lived as little as two centuries later. Why is this true? First, we have ready access to not only the entire Bible but to many secular writings of the day that give us important historical, cultural, or linguistic information. We have the Bible available to us in the original tongues... We also have access to a vast amount of writing from earlier generations." (Pg. 82)

He states, "The canon of Scripture tells us something ABOUT Scripture: that is, the canon speaks to the EXTENT of the work of God in inspiring Scripture. God defines the canon not by giving some revelation outside of the scriptura but by giving the scriptura itself! The Roman error lies in creating a dichotomy between two things that cannot be separated, and then using that false dichotomy to deny sola scriptura." (Pg. 94)

He argues, "The ... reason that leaping from Peter's prominence in the Gospel accounts to the Roman concept of primacy is improper and illogical is because the rest of the New Testament does not give us a hint of Peter's supposed supremacy." (Pg. 109) He adds, "Much has been said by Roman Catholic apologists about what Matthew 16:18 would read in Aramaic... is it not strange that when dealing with the central passage used to support the papacy, they must appeal to a nonexistent, unknown 'Aramaic original' that no one... can possibly claim to be able to re-create with certainty?" (Pg. 116-117)

He says, "Does it follow that all Roman Catholics are lost? Not unless we believe that all Roman Catholics walk in lock-step with the official teachings of the Vatican. I am thankful that there are those who know the freedom of grace even while maintaining a relationship with a Church that does not give place to that freedom in its official teachings. What of evangelism?... I agree that ALL PEOPLE, including those who claim religious faith, should be the objects of evangelism. Many Protestants are in need of evangelism... even if a person has been baptized... he or she needs to hear the message, 'Repent and believe the Gospel.' At that point labels are not relevant." (Pg. 221-222)

This book goes substantially beyond White's earlier books on Catholicism, and will be of great interest to anyone studying these doctrinal issues.