The Rare Jewel of Christian Contentment by Jeremiah Burroughs (Paperback) 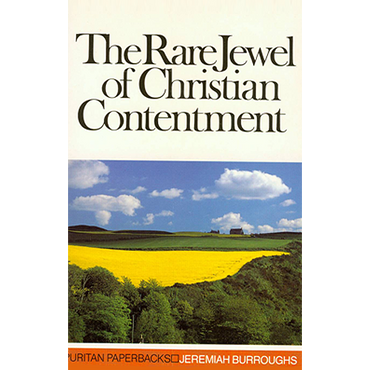 The Rare Jewel of Christian Contentment by Jeremiah Burroughs (Paperback)

Jeremiah Burroughs was one of the most popular preachers in London during his time there. He was one of the Independent members of the Westminster Assembly of Divines, and a Congregationalist. He spent 6 years at a small country church (St. Margaret's, Tivetshall), which is still standing and in use. During his time in London, he preached the mornings at the church in Stepney, outside of London, where William Greenhill preached in the afternoon. In the afternoons Burroughs preached at St. Giles Cripplegate.

Jeremiah Burroughs is worthily reckoned as belonging to the front rank of English puritan preachers. As such he played a prominent part in the Westminster Assembly of divines, but died prematurely before the Assembly’s work was concluded.

Burrough’s writings, some published before and others after his death, were numerous, but The Rare-Jewel of Christian Contentment is one of the most valuable of them all. Its author was much concerned to promote (1) peace among believers of various ‘persuasions’ (2) peace and contentment in the hearts of individual believers during what he describes as ‘sad and sinking times’. The Rare Jewel concentrates upon this second aim. It is marked by sanity, clarity, aptness of illustration, and warmth of appeal to the heart. ‘There is an ark that you may come into, and no men in the world may live such comfortable, cheerful and contented lives as the saints of God’. Burroughs presses his lesson home with all the fervour and cogency of a true and faithful minister of God.

This is 'the book' on the doctrine of Christian contentment. The depth of the Puritans is rarely even approached by modern authors. Burrough's takes you through some of the ABC's of Christian living. For example on p.87-88 "We deserve nothing and therefore why should we be impatient if we do not get what we desire." Perhaps at the root of discontentment is that we really do not desire God's will in everything, at least in some things we want the Lord to rubber stamp and implement our will even if it is contrary to His. A Christian can be content no matter what their circumstances because contentment comes from the inward state of the heart and not from outward circumstances as the author ably instructs the reader. The importance of a believer learning to be content(and it is a lifelong process)would be difficult to overstate. It helps in dealing with temptation, it prepares the Christian for any type of service their Lord and Master requires of them, and it brings great comfort no matter how bleak things may appear to be. The writer also enables the reader to understand how that comfort is brought, on p.130 " Certainly our contentment does not consist in getting the thing we desire, but in God's fashioning our spirits to our conditions." God works in us to view things by faith, and by doing so , we see things more and more filtered through God's perspective. By doing that we can see a little more of the big picture of all of the Lord's dealings with His people and bring that to bear on what is happening in our life. Any Christian who learns to be more content both glorifies God and becomes increasingly useful in His service and thats why this book is so important and useful for the Lord's people.