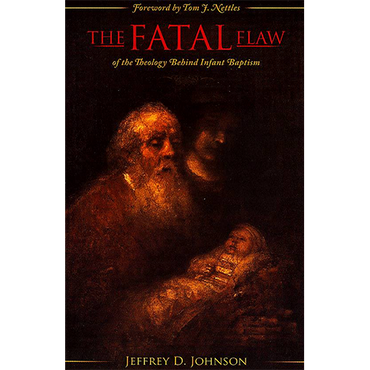 The Fatal Flaw exposes the inconsistencies of the theology behind infant baptism. Rather than rehashing the familiar arguments against infant baptism, this work seeks to undercut its very foundation. What is the theological system which under girds infant baptism and where does this system come unraveled? This work answers these questions by explaining the distinction in the nature of the old and new covenants and their often misunderstood relationship with one another. This critical discussion of the continuity and discontinuity of the covenants is thoroughly explored in this book. To understand the biblical connection between the covenants, it is vital to first understand the dual nature of the Abrahamic Covenant. What is the relationship between Abraham and Moses, Abraham and Christ, and Moses and Christ? The debate of continuity and discontinuity between the old and new covenants cannot be properly solved until the intended nature of the Abrahamic Covenant is fully comprehended.

I very much recommend this new book. It is an excellent study of various covenant theologies and also an argument against infant baptism. But I want to quibble with one page of this book. I quote Johnson:

Johnson continues: "The law justifies but before the law men could not merit salvation by works, because there was no covenant....If all this is true, then the Mosaic covenant had to be a covenant of works; our salvation depended upon it. If not, there would be no covenant to reward the man Christ Jesus for His obedience."

I have of course not quoted the entire argument. I encourage you to buy the book and read the discussion beginning on p 146 an ending on p162. What do I disagree with in the above argument? I agree that Christ was not born under the federal headship of Adam. I agree that the Mosaic covenant was a legal conditional covenant.

I am not disagreeing that there is legal covenantal arrangement with Adam. Even though as a supralapsarian, I do question language about what Adam "could have earned if he had passed probation", I do not at all question the federal imputation of Adam's sins to the human race, including to the elect. And I as noted in my first paragraph, I agree that the Mosaic covenant is conditional, so that it ends with the coming of Christ.

Johnson does not really answer this question, and I would love to have a talk with him about it. He quotes Galatians 4 about Christ being born under the law to redeem those under the law. While I do not doubt that Christ was born under the Mosaic law, I do question if "under the law" can be identified with "under the Mosaic law", even in Galatians. I know that it is now common in biblical theology (not only in Baptist new covenant theology) to say that "the law" must mean only "Mosaic law", but I still question if we can deal with Galatians in that simple fashion.

Is it true that Gentiles are now or ever were under the curse of the Mosaic law? I am only asking a question here. Please don't call me a dispensationalist for asking the question! My hope in the gospel has everything to do with Christ legally paying off (satisfying) the curses of God's law against the elect. But my hope in the gospel does not depend on me identifying God's law with the Mosaic law.

As James Haldane suggests in his commentary on Hebrews (p245, Newport Commentary Series, Particular Baptist Press), the solution to the problem of the first covenant is not to find a mediator of that first covenant. If a former covenant is infringed by one of the parties, satisfaction is given by making a second covenant.

If we can make distinctions between covenants, as Johnson is advocating, and we should, then we should make distinction between God's law. Of course, Johnson does refer to "the moral law", and thus assumes a difference between the ceremonial laws of Moses and other laws. And paedobaptists do this as well.

I am not denying that Christ was cursed by God's law for the sins of the elect. I am only questioning the idea of pointing to the Mosaic covenant as that law or as that "covenant of works" for Christ. If you want to use the language of a covenant of works for Christ our federal Head, why not go to the Abrahamic covenant for that? Or even better, why not refer to a "covenant of redemption" which is neither the Mosaic nor the Abrahamic (in its conditional aspect, for the physical children of Abraham, such as the duty to be physically circumcised)?

Hebrews 13:20--"the God of peace brought again from the dead our Lord Jesus, the great shepherd of the sheep, by the blood of the eternal covenant."

Are the elect justified on the basis of the physical circumcision of Christ? I am not denying that Christ was physically circumcised, but I am questioning if that circumcision was a vicarious law-keeping for the elect. Since we Gentile elect were never commanded to be physically circumcised, how then we can be cursed because our parents didn't do it, or blessed because Christ did do it?

With thanks to the memory of Jonathan Rainbow, who recently died, and who asked these same questions thirty years ago. How can the ceremonies curse? See also his wonderful novel, Speak To Her Kindly, and his essay on "Confessor Baptism", in Believer's Baptism, 2006, Schreiner and Wright