The Crook in the Lot: What to believe when our lot in life is not health, wealth, and happiness 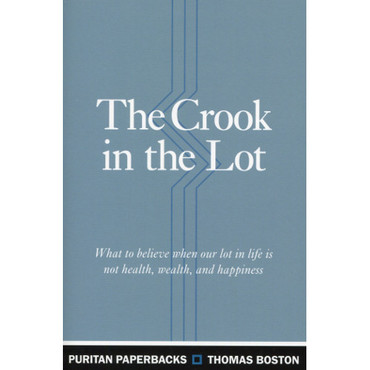 The Crook in the Lot: What to believe when our lot in life is not health, wealth, and happiness

What to believe when our lot in life is not health, wealth, and happiness.

Thomas Boston (1676-1732) was a remarkable Scottish theologian and pastor. His Works run to 12 volumes and contain some lengthy theological treatises. But Boston also wrote brief, very accessible, and pastoral books, and chief among these is the quaintly titled, The Crook in the Lot: The Sovereignty and Wisdom of God, in the Afflictions of Men Displayed. This little book is a pastoral masterpiece, in which Boston reflects on the words of Ecclesiastes 7:13, ‘Consider the work of God: for who can make that straight which he hath made crooked?’

By ‘lot’, Boston means our ‘lot in life’, the shape of our lives as they are styled by God’s many providences. By ‘crook’, he means those unforeseen troubles that afflict, unsettle, or disturb us in any way. Boston sets out to minister pastoral wisdom and help to God’s people experiencing what Paul calls ‘the sufferings of this present time’ (Rom. 8:18).

The Crook in the Lot is pastoral medicine prepared in the laboratory of Boston’s own personal and ministerial sufferings. It is little wonder that Jonathan Edwards considered Boston ‘a truly great divine’. He was indeed! — From The Foreword by Ian Hamilton

An Exposition of Proverbs 16:19

Thomas Boston (1676–1732) was a Scottish church leader. He was educated at Edinburgh, and licensed in 1697 by the presbytery of Chirnside. In 1699 he became minister of the small parish of Simprin, where there were only 90 examinable persons. His autobiography is a record of Scottish life, with humorous touches, intentional and otherwise. His books, The Fourfold State, The Crook in the Lot, and his Body of Divinity and Miscellanies, had a powerful influence over the Scottish peasantry.