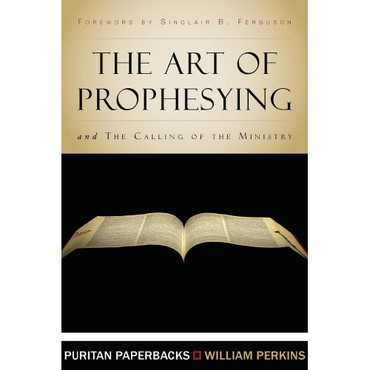 Few things are more evident in contemporary churches than the decline in the importance attached to what is said from their pulpits. The deeper tragedy is that in many places the church has become a valley of dry bones. Something is needed to waken the dead and to breathe new life into the people of God. William Perkins (1558-1602) provides basic guidance to help all Christians to read and use the Bible intelligently. He has a particularly powerful message for those who lead God’s people and especially those who preach.

The Art of Prophesying carries sparks capable of igniting a preacher. It should be beside every minister’s desk as a book to turn to again and again.

The Art of Prophesying

1. The Art of Prophecy

3. The Contents of Scripture

4. The Interpretation of Scripture

6. Rightly Handling the Word of God

9. The Use of the Memory

The Calling of the Ministry

1. The Titles of True Ministers

2. The Scarcity of True Ministers

3. The Office of True Ministers

4. The Blessing of the Work of True Ministers

5. The Commission and Authority of True Ministers

1. The Vision of God

The great Puritan preacher and theologian William Perkins was born in 1558 in Marston Jabbet in Warwickshire, and received his formal education at Christ’s College, Cambridge. He graduated B.A. in 1581, but remained at Christ’s as a fellow until 1595; he served as lecturer (preacher) in the church of Great St Andrews from 1584 until his death in 1602 at the age of forty-four.

A man of considerable ability, Perkins has been described as ‘the Puritan theologian of Tudor times’. Deeply committed to the awakening and transforming of professing Christians, he recognised the central importance of Christian godliness and the strategic, God-given signiﬁcance of what transpired in the pulpits of England. With this vision he laboured to proclaim the gospel. Abundant testimony to the power with which he did this now ﬁlls the three great folio volumes of his Works.

Concern for the advance of the gospel was not always the leading feature of William Perkins’ life. He was far from Christ in his early days at Cambridge. But in the mercy of God, like the prodigal son, he ‘came to himself’. According to tradition this awakening began when he overheard a woman threatening her son, ‘Hold your tongue, or I will give you to drunken Perkins yonder.’ Doubtless various inﬂuences played their God-ordained roles, including perhaps his tutor, the remarkable evangelical preacher Laurence Chaderton. In any event, wonderfully drawn to Christ, Perkins now laid his whole life before his new Master in gratitude and tribute, and began to preach, ﬁrst of all to condemned prisoners in the castle jail. Later he would exercise his considerable gifts from the pulpit of Great St Andrews, where he continued to minister until his death.