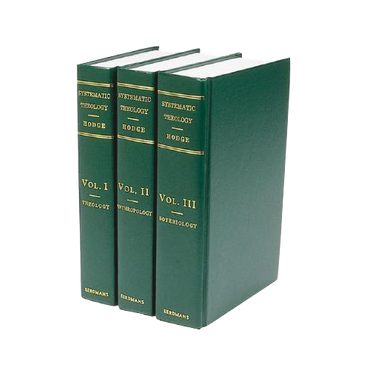 The magnum opus of one of America's most prominent theologians offers an in-depth exploration of theology, anthropology, soteriology, and eschatology. This monumental work, now a standard for theological students, was written while Hodge served as a professor at Princeton, where he permanently influenced American Christianity as a teacher, preacher, and exegete. Includes a comprehensive index.

Anyone wanting to read Hodge, should go with the three volume edition. Yes, there is far too much interaction with the pseudo-science of the day, but this "abridgement" lays waste to whole areas of interest to anyone who would want to read Hodge in the first place. It's interesting that one of the areas where the cutting is most obvious is in the area where the "editor" disagrees with Hodge the most, that is the locus of "eschatology". The editor is a Premillennialist and Hodge, like all Princetonians was a clear Postmillennialist. If you want to read Hodge without the excess verbiage, buy A.A Hodge's "Outlines of Theology", which is based on the very same lectures that Charles Hodge published as his Systematics. It's simpler, yet doesn't alter the truth the way this chopped-up mess does. This abridgement is a master maligned.