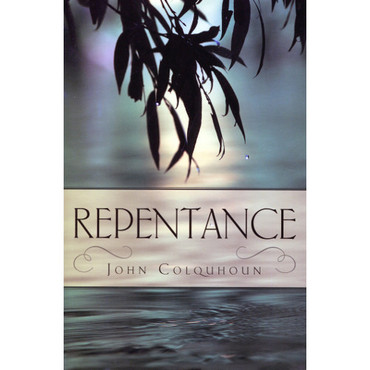 In this treatment of the biblically doctrine of repentance the author distinguished between evangelical or true repentance and legal repentance. Though the latter may be produced by a fear of God’s wrath and lead to reformation of life, it is an experience which falls short of salvation. Evangelical repentance, on the other hand, is the result of the Holy Spirit’s work in regeneration, is inseparable from faith in Jesus Christ, and is evidenced by turning from all sin to God.

John Colquhoun, minister in the Church of Scotland at Leith, deals in turn with the sources, nature, necessity, fruits and evidences of evangelical repentance, how it differs from legal repentance, and how logically (although not in respect of time) it must be preceded by faith and justification. The author leaves his reader in no doubt that without such repentance there is no scriptural warrant to assume that a person is born again of the Spirit. He provides an excellent corrective to a superficial conception of conversion.

While on a walking tour through Scotland during a College vacation, Alexander Moody Stuart spent a weekend at a country inn on the road between Glasgow and Edinburgh. His interest was aroused in two lads who arrived at the inn late on the Saturday evening. After spending the night there they left early next morning and returned to the inn again that evening. He discovered that they were working lads from Glasgow who, on coming under spiritual concern, had sought for a minister that preached the gospel fully. They eventually found a preacher to their mind in Edinburgh and were determined to wait on his ministry. That preacher was Dr John Colquhoun of the New Church in South Leith. Such value did they set upon Colquhoun’s preaching that they were willing to walk about a hundred miles each weekend to hear him and be back at their work at 6 o’clock on Monday morning. These young Christians were typical of many in Scotland at the beginning of the nineteenth century who had felt the power of the Word and therefore highly prized the full gospel ministry at South Leith. With much of the Church of Scotland lying under the blight of unbelieving Moderatism, ministries like that of Colquhoun and his contemporaries – Dr John Love of Glasgow and Dr MacDonald of Ferintosh – were oases in the desert.

John Colquhoun was born at Luss in Dunbartonshire on 1 January, 1748. The son of a small farmer, he received his elementary education at the local Society for the Promotion of Christian Knowledge (SPCK) school. The teacher, a Christian, not only instructed the minds of his pupils but sought to impress the truth upon their hearts. It was to his explanation and application of the Westminster Shorter Catechism question, ‘What is effectual calling?’ that Colquhoun afterwards traced his conversion.

On feeling led to devote himself to the ministry he entered Glasgow University in 1768, where he pursued his studies for ten years. The Presbytery of Glasgow licensed him to preach in 1780, and the following year he was ordained to what proved to be his only pastoral charge—the New Church in South Leith (St John’s, Constitution Street). There he exercised an effective ministry until forced to give up through ill-health a year before his death in 1827.

Shortly after his conversion John Colquhoun had walked all the way from Luss to Glasgow, a distance in all of about fifty miles, to buy a copy of Thomas Boston’s Fourfold State. This book had a moulding influence on his early Christian life. He came to esteem it next to his Bible. The influence of Boston’s teaching was later to permeate his ministry and writings. Thomas Boston’s remains had been laid to rest in the beautiful churchyard of Ettrick sixteen years before Colquhoun was born, but few if any of his followers bore such marks of his influence as the minister of South Leith.

Although a minister of the Established Church, Colquhoun was regarded as one of the ablest exponents of ‘Marrow’ theology. By an Act of Assembly on 20 May, 1720 his Church had condemned the book, The Marrow of Modern Divinity, because it maintained that there was a universal call and offer of the gospel to sinners. Defenders of the free offer—nicknamed ‘Marrowmen’—foremost of whom were Thomas Boston and the Erskine brothers, were forced to secede from the Church in 1722. Later, however, as we find in the case of John Colquhoun, upholders of ‘Marrow’ teaching continued to exercise their ministry within the Establishment. How Colquhoun reconciled his respect for an Act of the General Assembly with his uncompromising maintenance of ‘Marrow’ theology is illustrated in some advice he is reported to have given to the students who sought his counsel. ‘Noo, ye ken’, he would say to them in his colloquial tongue, ‘I daurna advise ye to read the “Marrow” for the Assembly condemned it; but though they condemned the “Marrow” they didna condemn Tammes Boston’s notes on the “Marrow”, and that’s a book that ye should read.’

It is not surprising that one of the great characteristics of Colquhoun’s ministry was the emphasis on the duty and necessity of sinners complying with the offers and invitations of the gospel. At the same time he dwelt much on the danger of hypocrisy. The depth of his own spiritual experience, his discriminating views of truth, and his aptitude for religious conversation made him of great use to those in spiritual distress.

Retired and unassuming by nature, he sought no place of distinction in the Church. Indeed, it was in his mature years that he began his career as an author. He wrote seven treatises, all of which are closely related in theme and manner of presentation. The first to appear was on Spiritual Comfort in 1813. It was followed by Law and Gospel (1815), The Covenant of Grace (1818), The Covenant of Works (1822), Saving Faith (1824), The Promises (1825), and Evangelical Repentance (1826; republished by the Trust in 1965 as Repentance).

It was in his writings perhaps more than anything else that Colquhoun came nearest to Boston. They were both at their best in expounding the grand central themes of salvation, and so thoroughly had Colquhoun imbibed The Fourfold State that in cast of thought, mode of development, and turn of expression his own writings bear striking similarities to it. Above all, the works of both are thoroughly experimental and practical. They preached and wrote for the common people, and it was the common people of Scotland for many generations following that loved and valued their works.