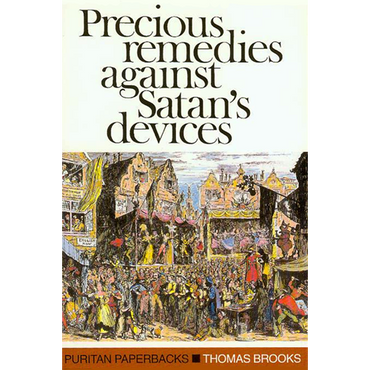 Little is known about Thomas Brooks as a man, other than can be ascertained from his many writings. Born, probably of well-to-do parents, in 1608, Brooks entered Emmanuel College, Cambridge, in 1625. He was licensed as a preacher of the gospel by 1640 at the latest. Before that date he seems to have spent a number of years at sea, probably as a chaplain with the fleet. After the Civil War, Brooks became minister at Thomas Apostle s, London, and was sufficiently renowned to be chosen as preacher before the House of Commons on 26 December, 1648. Three or four years later he moved to St Margaret s, Fish-street Hill, London, but encountered considerable opposition as he refused baptism and the Lord s Supper to those clearly unworthy of such privileges. The following years were filled with written as well as spoken ministry. In 1662 he fell victim to the notorious Act of Uniformity, but he appears to have remained in his parish and to have preached the Word as opportunity offered. Treatises continued to flow from his agile pen. In 1677 or 1678 he married for the second time, 'she spring-young, he winter-old'. Two years later he went home to his Lord.

Brooks treated the seductive influence and terrible power of Satan in a way greatly more full and suggestive than in the literature of the present day.

Brooks lists seven reasons for writing this book. The first reason is enough…Brooks says, “Satan hath a greater influence upon men, and higher advantages over them than they think he hath, and the knowledge of his high advantage is the highway to disappoint him, and to render the soul strong in resisting, and happy in conquering.

Next to most people's Bibles is a copy of John Bunyan's classic THE PILGRIM'S PROGRESS. However, Brooks' amazingly convicting PRECIOUS REMEDIES should be on the other side. This is possibly the most valuable of all the puritan writings, and a must read for every Christian, especially those struggling and/or tampering with sin. Satan hates this work as it exposes his devices....and offers biblical methods to avoid and overcome them. Seek this one out at all costs. Banner of Truth ministries still carries this title.