Preachers of Scotland: From the Sixth to the Nineteenth Century by William G. Blaikie (Hardcover) 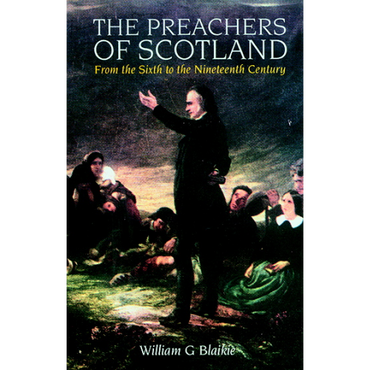 Preachers of Scotland: From the Sixth to the Nineteenth Century by William G. Blaikie (Hardcover)

The volume here reprinted provides one of the most readable and popular summaries of the leading preachers of Scotland from the time of the Celtic Church to the 1880s when Blaikie wrote. It covers the lives and power of the preachers in the context of their times, but the author’s intention is more than historical narrative. Welcoming the first appearance of Blaikie’s work in 1888, C.H. Spurgeon wrote: ‘A valuable volume. The lectures before us are an able tribute to those who in Scottish pulpits served, not Scotland only, but all our Lord’s kingdom on earth…The history of the Scottish pulpit has many lessons for modern preachers. Professor Blaikie wisely points them out. Perhaps none is more clear than this: that the gospel of Jesus Christ best supplies the needs of every age. No other remedy for social wrongs and disorders is so effective. There need be no fear of failure in the pulpit so long as the gospel is faithfully preached; but ministers who think that they must ever be telling some new tiding may here see that nothing is so attractive as the old, old story of Jesus and his love.’

Dr William Garden Blaikie (1820-99) was Professor of Apologetics and Pastoral Theology at New College, Edinburgh, from 1868 to 1897.

Son of James Blaikie, Advocate and Provost of Aberdeen, and educated at Marischal College, Aberdeen, and Edinburgh University, he was ordained to the parish of Drumblade, Aberdeenshire in 1842. At the Disruption in 1843 he cast in his lot with the Free Church of Scotland and was called to Pilrig Free Church, Edinburgh, in 1844. He was Moderator of the General Assembly in 1892 and Convener of the Home Mission Committee, 1874-8.

At various times Blaikie was the editor of the North British Review, the Sunday Magazine, the Catholic Presbyterian and the Free Church Magazine. His writings include For the Work of the Ministry (1873), The Book of Joshua (1893), The First Book of Samuel (1888), The Second Book of Samuel (1888), Better Days for Working People(1867), The Personal Life of David Livingstone (1880), and The Preachers of Scotland(1888), the last-mentioned being published by the Trust.

‘A valuable volume. The lectures, before us are an able tribute to those who in Scottish pulpits served, not Scotland only, but all our Lord’s kingdom on earth.’ –C.H. SPURGEON