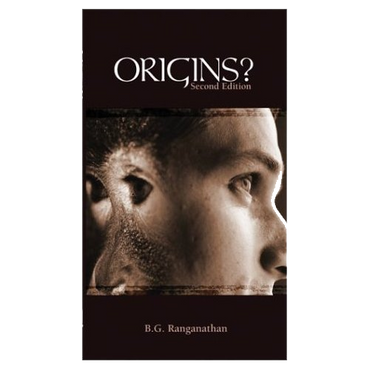 The author, B.G. Ranganathan (pronounced "Ranga-nathan") was born in Madras, India, and at a young age emigrated with his family to the United States. Mr. Ranganathan was raised in a traditional Hindu family but during his early teenage years he recognized his need for salvation and received the Lord Jesus Christ into his heart as his personal Lord and Savior. He received his B.A. with academic concentrations in theology and biology and has given lectures and seminars to science faculty and students at various secular colleges and universities on the scientific merits of creation vs. evolution. As a science and religion writer Mr. Ranganathan has been recognized in the 24th edition of Marquis' Who's Who In The East.

It is often taken for granted that 'Science has disproved the Bible'. Instead of the Christian confession 'I believe in God the Father Almighty, Maker of heaven and earth', many modern people say, 'I don't believe in God, I believe in Evolution'. Origins? investigates this new faith of twentieth century man, and asks a series of penetrating questions about it: - Is evolution consistent with other major scientific principles? - On what actual evidence does it depend? - What does the fossil record really prove?

Found this in a second-hand bookstore and had to add it to my collection of creationist ignorance. This is another in a looong line of silly creationist misinterpretation of entry level science. It is truly sad that these people are so insecure about their religious beliefs that they feel they must commandeer science in an attempt to bolster their antique, fundamentalist world-view. If you can make it through 10 pages of this tract without finding numerous errors of the most basic science, you may need to go back to junior high.