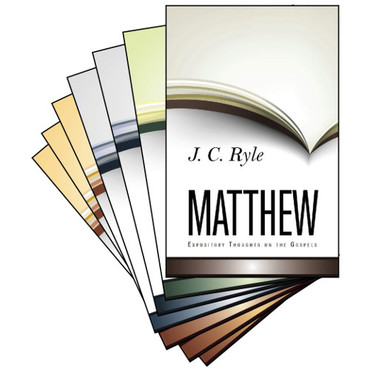 Gospel of Matthew – 1 Volume As the first Gospel in the New Testament, Matthew was, not surprisingly, the first to be published in J. C. Ryle’s series of Expository Thoughts on the Gospels (1856). Ryle’s expositions are a rich combination of doctrinal and practical comments on the Gospel text.

Ryle’s Expository Thoughts can be used as a help in family worship, or as an aid in pastoral visitation, or simply as a companion to the Gospels in the private reading of Scripture.

Gospel of Mark – 1 Volume First published in 1857, Mark was the second book to appear in J. C. Ryle’s series of Expository Thoughts on the Gospels.

The earliest of the Gospel narratives to be written, Mark, says Ryle, ‘is singularly full of precious facts about the Lord Jesus, narrated in a simple, terse, pithy, and condensed style’. Those last four adjectives could well be used to describe Ryle’s own comments on the Gospel!

Gospel of Luke – 2 Volumes Within a year of publishing Mark in his Expository Thoughts on the Gospels series, J. C. Ryle had, in 1858, completed the Gospel of Luke.

Written specifically for a non-Jewish readership, Luke’s Gospel is perhaps the most ‘accessible’ of the narratives of the life of Christ for modern readers. Ryle’s desire for his readers mirrors that of Luke Luke 1:4), that they might gain ‘a more clear knowledge of Christ, as a living person, a living priest, a living physician, a living friend, a living advocate at the right hand of God, and a living Saviour soon about to come again’.

Gospel of John – 3 Volumes ‘The Gospel of St. John, rightly interpreted, is the best and simplest answer to those who profess to admire a vague and indistinct Christianity.’ There were many such in J. C. Ryle’s day, as in our own, and these final three volumes of his Expository Thoughts on the Gospels series provide a detailed commentary upon, and ‘right interpretation’ of the fourth Gospel.

In these volumes Ryle shows again that, as in all his writing and preaching, he was first and foremost a pastor, and as J. I. Packer has pointed out, ‘alongside the question “Is it true?” the question “What effect will this have on ordinary people?” was always in his mind’.

ohn Charles Ryle 1816-1900 was born Macclesfield, Chesire and educated at Eton and Christ Church, Oxford. Graduating with a First in 'Greats' (Classics), his sporting prowess saw him represent the University at rowing and cricket.

A political career beckoned until his father's bank crashed in 1841. Instead he entered the Church of England ministry. Long afterwards he wrote, 'I have not the least doubt, it was all for the best. If I had not been ruined, I should never have been a clergyman, never have preached a sermon, or written a tract or book.'

Ryle served churches in Hampshire before moving to Helmingham, Suffolk, in 1844. It was here that he began his Expository Thoughts on the Gospels. The volumes on Matthew, Mark, and Luke were published between 1856 and 1858.

In 1861, Ryle became vicar of Stradbroke, Suffolk, where he became known for his plain preaching and firm defence of evangelical principles. He wrote several well-known books, many of them still in print today. It was at Stradbroke that he completed his Expository Thoughts series in 1873.

In 1880 Ryle became the first bishop of Liverpool. His episcopate was marked by efforts to build churches and mission halls to reach the rapidly expanding population of the city. Retiring in 1900 aged 83, Ryle died later the same year in Lowestoft, Suffolk. His successor in Liverpool described him as a 'man of granite with the heart of a child'.

My wife and I were married in May 2014, and I knew as a new husband my devotional time with the Lord would now daily involve another person. Ryle’s 7 volumes on the gospels were our portion for 8 months in our devotional times in the evenings together and they were exciting to open everyday. Ryle has a simple yet profound way of taking Gods truth and bringing it to life. He was a highly gifted man and his writings speak for themselves. I would recommend these volumes to any young married couple who want their devotional times together to be be both informative and spiritually enriching. Ryle will point the way to Christ on every page and will also give you a longing to be alone with Jesus.

I still hold firmly to the truth of a man taking himself aside and being alone with God as he rises every morning, this being the utmost priority in the life of any husband and also every Christian for that matter. A husbands devotional time with his God is what will hold a family together and he should never leave the secret place without receiving the Lords blessing. This he must do alone without distraction. After He has met with God he is free to build his wifes faith by sharing devotional times with her whether morning or evening.

Ryle is a great place to begin when sharing a new devotional life together, he will point you to the Saviour with honesty, integrity and humility. I would recommend these 7 volumes over any other volumes on the gospels for both devotional and study purposes. They have made our married life very rich in the Lord and we were gutted when the last volume came to an end. Please take advantage of these books, you will not regret it.
God Bless