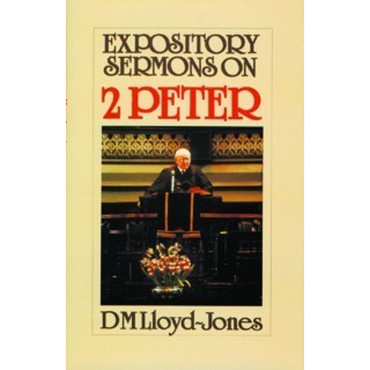 When Dr. Lloyd-Jones preached these twenty-five sermons on 2 Peter, collected in Expository Sermons on 2 Peter, (October 1946-1947) comparatively few saw their far-reaching significance. The minister of Westminster Chapel, London, was proposing to rebuild a congregation on lines strangely unfamiliar in post-war Britain. The sermons’ form- authoritative, expository preaching – and, still more, their content, were against all the prevailing trends. J. I. Packer, one of his younger hearers in the late 1940s, has written: ‘I had never heard such preaching and was electrified. All that I know about preaching, I can honestly say, I learned from “the Doctor”. I have never heard another preacher with so much of God about him’.

The content of this volume is its chief warrant for publication. But as a record of Dr. Lloyd-Jones’ first extensive series of sermons on any one book of Scripture it also has some special interest. With treatment which is broader and less detailed than normal (intentionally he does not deal with every verse) his hearers were introduced to expository preaching. Now, in this format, his 2 Peter sermons will provide an introduction for others to a type of reading which is able, under God, to strengthen Christians and churches around the world.

David Martyn Lloyd-Jones was born in Cardiff and raised in Llangeitho, Ceredigion, Wales. Educated at Tregaron County Intermediate School and then in London at Marylebone Grammar School between 1914 and 1917, he went to St Bartholomew’s Hospital as a medical student. He then worked as Chief Clinical Assistant to the Royal Physician, Sir Thomas Horder.

After sensing a call to preach, in 1927 Lloyd-Jones returned to Wales – having married Bethan Phillips (with whom he later had two children, Elizabeth and Ann) – as minister at the Bethlehem Forward Movement Church (known as ‘Sandfields’) in Aberavon (Port Talbot).

After eleven years at Sandfields, he was called in 1939 to be associate pastor of Westminster Chapel, London, working alongside G. Campbell Morgan. During the same year, he became the president of the Inter-Varsity Fellowship of Students (known today as the Universities and Colleges Christian Fellowship (UK)). In 1943 Campbell Morgan retired, leaving Lloyd-Jones as the sole Pastor of Westminster Chapel, a position he was to hold for the next 25 years.

After retiring from Westminster Chapel in 1968, due to illness, for the rest of his life ‘the Doctor’ concentrated on editing his sermons for publication, counselling other ministers, answering letters and attending conferences. He preached for the last time on June 8, 1980, at Barcombe Baptist Chapel. He died peacefully in his sleep at Ealing on March 1, 1981, and was buried at Newcastle Emlyn, near Cardigan, west Wales.