Doctrine of the Holy Spirit by George Smeaton 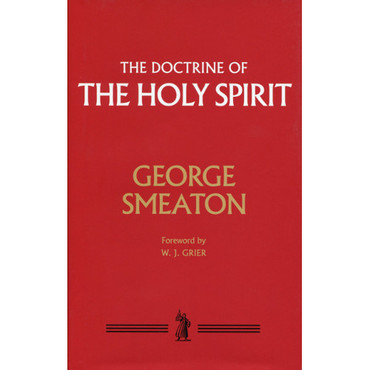 Doctrine of the Holy Spirit by George Smeaton

‘Wherever Christianity has become a living power, the doctrine of the Holy Spirit has uniformly been regarded, equally with the atonement and justification by faith, as the article of the standing or falling church…’ — GEORGE SMEATON

The Doctrine of the Holy Spirit formed the capstone of George Smeaton’s teaching.

Though considered by his colleague, James Macgregor, to possess ‘the best constituted theological intellect in Christendom’, Smeaton’s lucid style and earnest spiritual convictions make him valuable to all Christian readers.

Filled with the Spirit at Pentecost, he writes, ‘the timid became bold, the selfish self-denied, the arrogant humble’, and he characterizes as ‘mischievous and misleading’ the opinion that the church, having received the Paraclete, is no longer warranted to pray for effusions of transforming power today.

In 1853, he took up the Chair of Divinity at the Free Church College in Aberdeen, and in 1857, was transferred to the New College in Edinburgh, where he held the position of Professor of New Testament Exegesis until his death.

Smeaton was held in high regard by his contemporaries—his colleague James
Macgregor thought that Smeaton had the best-constituted theological intellect in Christendom, and Dr Alexander Stewart of Edinburgh said that he was ‘perhaps the most learned theologian in the Free Church and a man of deep and unaffected godliness.’

Smeaton married Janet Goold in 1840 and had five children, four of whom died before him. The comfort he received from God in the midst of these bereavements enabled him in turn to be a great comforter to those in tribulation. As his obituary noted, ‘In the chamber of sickness and the house of mourning he was ever a welcome visitor, and to the last he did not grudge hours spent every week in this gentle and useful ministry.’

‘Page after page glows with the ardour of a preacher who is enamoured of his theme … The truth is so real to his own experience that he cares little for unprofitable controversies.’ — C.H. SPURGEON

‘George Smeaton was convinced that the doctrine of the Holy Spirit had been sorely neglected in his generation. He was surely right. Sadly, his indictment is true of Christians in our own times. In this book he offers a great corrective to that neglect and is thoroughly biblical, faithful, and perceptive. My favorite line in this book has always been Smeaton’s last in his first preface: ‘May the Holy Spirit, whose personality and work this treatise is intended to exhibit, condescend to accept and bless it to the glory of a Three-One God.’ This book is a great gift to the church, and belongs in every Christian’s library of classics.’ — AL MOHLER

‘Books on the Holy Spirit from the nineteenth century, of continuing outstanding value and insight, include those by James Buchanan, Abraham Kuiper and George Smeaton. Smeaton was a brilliant scholar and committed to both exegetical and reformed theology. His treatise on the Holy Spirit ranks in the highest levels.’ — DEREK THOMAS

‘George Smeaton was one of the finest theologians ever to grace Scotland. Though his volumes on Christ’s atonement are better known, his book on the Holy Spirit is a golden treasure of biblical truth. The sometimes neglected and often misunderstood Third Person of the Trinity shines with His divine glory in these pages as Smeaton traces the Spirit’s work in Christ for our sake and His work in us for Christ’s sake. May God bless this reprint so that many will know by experience the supernatural power of the Spirit about whom Smeaton wrote.’ — JOEL BEEKE

‘Biblically grounded, theologically brilliant, and historically astute, this work by George Smeaton, The Doctrine of the Holy Spirit, is a skillful treatment of the Third Person of the Trinity. This may be the most important work ever written on this monumental subject. Comprehensive in scope, every believer should master and be mastered by this profound treatment of the person and work of the Spirit.’ — STEVEN J. LAWSON

‘Dr Smeaton was the master of a very clear and unobtrusive style of expression. … He was as modest and unassuming as he was thorough and painstaking. A man can take his word in regard to any theme that he handles as soon as that of any writer on theological subjects.’ — PRINCIPAL JOHN MACLEOD

‘The Banner of Truth Trust publishes such beautifully bound volumes that the pastor’s understandable temptation is to buy them as ornaments for their bookcases. Smeaton and Buchanan, however, are meant for the desk. Open them, devour them, and then shelve them nearby — you’ll soon be reaching for them again.’ — CHAD VAN DIXHOORN