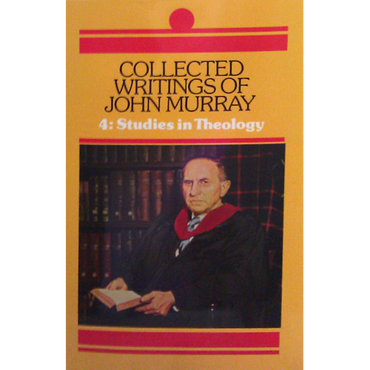 Studies in Theology is the fourth and concluding volume in the Collected Writings of John Murray. Like the preceding volumes it presents a selection of the finest work, produced mainly during his long and distinguished ministry as Professor of Systematic Theology at Westminister Theological Seminary, Philadelphia. Volume 4 includes articles dealing with several areas of doctrine which lay close to Murray's heart. Among them is the hitherto unpublished work, 'Jesus, the Son of God', which is possibly thr last piece of theological writing. Its chief characteristic - as with all of Murray's writings - lies in the way in which the text of Scripture suffuses everything he says. This concern to be thoroughly biblical applied also to his doctrine of Scripture, to Christology, and to his understanding of the proclamation of the gospel and the Christian ethic. Outstanding articles in each of these areas may be found in these pages. John Murray was a systematic theologian par excellence. But he also wrote several magisterial studies in the area of historical theology. Studies in Theology includes his expositions of Calvin's teaching on Scripture and Divine Sovereignty, the Theology of the Westminister Confession, and the Covenant Theology. All of these chapters display erudition of the highest quality, and at the same time are seasoned with the humility of mind which was one of John Murray's greatest spiritual qualities. Also included in this volume is a collection of Murray's book reviews which first appeared in The Westminister Theological Journal during the years 1954-1967. Major theological works influence teachers, students, ministers, and eventually the enture Christian church. For this reason Professor Murray's discussions of the writings of such influential figures as Karl Barth, Emil Brunner and G.C. Berkouwer are of lasting value.

Murray, born in Lancashire, England, was educated in the Isle of Man and at the University of Durham and entered the Christian ministry in 1955. He served as assistant to Dr. Martyn Lloyd-Jones at Westminister Chapel (1956-59) and subsequently at Grove Chapel, London (1961-69) and St. Giles Presbyterian Church, Sydney (1984-84), Although remaining a minister of the Presbyterian Church of Australia, he is founding trustee for Banner of Truth Trust.