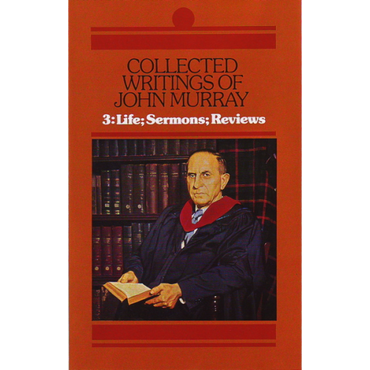 Murray was born in Scotland, was educated in Glasgow, Edinburgh, and Princeton, and spent most of his distinguished career teaching systematic theology at Westminster Theological Seminary, Philadelphia, Pennsylvania.

Since the publication of volumes one and two of the Collected Writings of John Murray, this third volume in the series has been eagerly awaited. As promised, it contains an extensive account of Murray's life and the first published collection of his sermons. Added to these are the penetrating and valuable book reviews which he contributed to The Westminster Theological Journal during the period 1939-1953. Iain H. Murray's biography of John Murray traces his life from his boyhood days in the north of Scotland at the turn of the century, through the First World War (in which he suffered the loss of one eye), his theological training at Princeton and his long ministry as a Seminary Professor in Philadelphia, until his retirement, his return to his native Scotland, and his late marriage and brief period of fatherhood. The biography closes with a moving account of his last days during the early months of 1974. Preaching was never merely an adjunct to Murray's work. On the contrary it was,for him, the reason why the teaching of theology exists. By his own example as a preacher he showed how all the great peaks and valleys of divine revelation are intended 'to lead needy men and women into the riches of God's counsel'. His sermons, including examples of his brief 'table addresses' given at communion services, exhibit the wonderful balance between profound theology and personal devotion to Christ as Savior and Lord in which he passionately believed. As Professor of Systematic Theology at Westminster Seminary, John Murray reviewed some of the most significant theological works for the Seminary's Journal. Not only did he provide critiques of many books, but at the same time he engaged in a dialogue with them which evoked his own insights and expositions of biblical truth. This quality gives his reviews (like those of his predecessor in the Princeton tradition, B.B Warfield) a permanent value. Volume 3 of Murray's Collected Writings brings to the reader both the story of his life and some of the choicest fruit of his ministry.