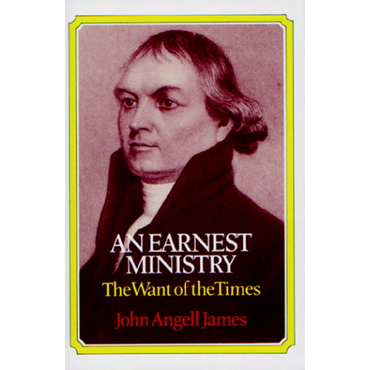 John Angell James’ book, An Earnest Ministry, is a classic on the Christian ministry. The reason lies largely in the manner in which he presents one simple idea: he argues that the effect of preaching is directly related to the heart-condition of the preacher, ‘it is feeling which gives power to words and thoughts’. To command attention for the truth, its spokesmen must first be earnest, that is to say, be possessed by one single aim and by a devotion which leads them to surrender all that would hinder its attainment.

Born in 1785, at a time when the preaching of the leaders of the evangelical revival was still remembered, James served Carrs Lane Congregational Church, Birmingham for fifty-five years. In later life he believed that the pulpit generally had become less effective, even though there was an increase in the availability of men, talent and training. He saw an evident loss of the power which Whitefield ‘studied, discovered, and applied'; preaching was no longer ‘adapted to produce conviction and conversion’.

Employing Scripture and the lessons of outstanding preaching, drawn from both sides of the Atlantic, James’ Earnest Ministryrenewed the same call as Baxter’s Reformed Pastor of two centuries earlier and it proved to be a book of no lesser value.

At a time when many false explanations are offered for the decline in preaching, and when many have even ceased to pray, ‘Send us preachers’, this volume goes back to fundamentals and is itself a proof of the power of true earnestness.

This book gives a person seeking the office of pastor a characteristic that cannot be neglected or lost. The characteristic cannot be confined into one definition, but can be summed up into one word, which is earnestness. Earnestness is to have power in the pulpit to gain the attention of those that hear you. It is a quality that references a striving and laboring towards the conversion of souls.

James lays out the apostolic ministry. A ministry that is concentrated on the bringing of sinners to reconciliation with God. Ministers should use all the acts of persuasion in order to accomplish this goal. Earnestness involves the selection of a particular object and then to realize its value and significance. Our object is not giving two eloquent, well prepared sermons on Sunday morning and to be pleased by the people. Our object is to preside over the people and as Hebrews 13:17 says, to watch for the souls and give account. James states that if souls are not saved, then "the great purpose of our ministry is defeated." He says the necessity of laboring for souls is the primary objective of pastoral ministry.

The object of value must take full possession of the mind and intense desire of the heart. James says that, "The object of an earnest man is never for any long period of time absent from his thoughts." The object of an earnest minister "is impressed upon his whole character, and is inseparable from his conduct." Ministers should use things that will "polish and plume his shafts or sharpen the points of his arrows," so that, "he may the more certainly hit and pierce the mark." Ministers should be in a constant state of learning in order to obtain their overall objective.