All Things for Good by Thomas Watson (Paperback) 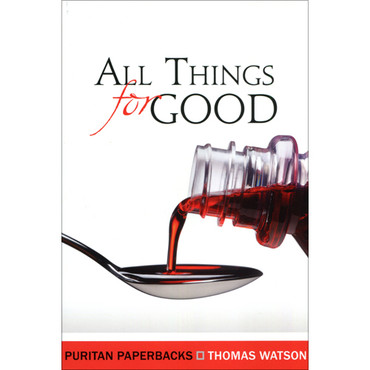 All Things for Good by Thomas Watson (Paperback)

Thomas Watson’s book All Things For Good provides the biblical answer to the contemporary question; Why do bad things happen to good people?

Thomas Watson, the 17th century minister of St. Stephen’s Walbrook, believed he faced two great difficulties in his pastoral ministry. The first was making the unbeliever sad, in the recognition of his need of God’s grace. The second was making the believer joyful in response to God’s grace. He believed the answer to the second difficulty could be found in Paul’s teaching in Romans 8.28: God works all things together for good for his people.

First published in 1663 (under the title A Divine Cordial), the year after Watson and some two thousand other ministers were ejected from the Church of England and exposed to hardship and suffering, All Things For Good contains the rich exposition of a man who lived when only faith in God’s Word could lead him to such confidence.

Thomas Watson’s exposition is always simple, illuminating and rich in practical application. He explains that both the best and the worst experiences work for the good of God’s people. He carefully analyses what it means to be someone who ‘loves God’ and is ‘called according to his purpose’.

Thomas Watson (1620 1686) was an English, Nonconformist, Puritan preacher and author. He was educated at Emmanuel College, Cambridge, where he was noted for remarkably intense study. In 1646 he commenced a sixteen-year pastorate at St. Stephen's, Walbrook. He showed strong Presbyterian views during the civil war, with, however, an attachment to the king, and in 1651 he was imprisoned briefly with some other ministers for his share in Christopher Love's plot to recall Charles II of England. He was released on 30 June 1652, and was formally reinstated as vicar of St. Stephen's Walbrook.

He obtained great fame and popularity as a preacher until the Restoration, when he was ejected for Nonconformity. Notwithstanding the rigor of the acts against dissenters, Watson continued to exercise his ministry privately as he found opportunity. Upon the Declaration of Indulgence in 1672 he obtained a license to preach at the great hall in Crosby House.

After preaching there for several years, his health gave way, and he retired to Barnston, Essex, where he died suddenly while praying in secret. He was buried on 28 July 1686.

The eminent Puritan pastor Thomas Watson gives us in 'All Things for Good' an exposition of Romans 8:28. In opening up this portion of God's Word his purpose is to comfort the Lord's people,and help them to see that even in the greatest trials that they will face, God is willing and able to make them work out for their good.

How can the Lord work trials ,both great and small,to bless and help His people? In this masterful treatise Watson shows us how this can be. In the first section of the first chapter we see that it is God's attributes, that being His power,His wisdom and His goodness that are operative in His children's behalf.

The Puritans were master physicians of the soul. One cannot help but think that the depth of their understanding on how God uses affiction and trials in the lives of believers was not just in theory but in large part experiential as well. Just a brief sketch of many of their lives would reveal that to be the case.

They also realized that whatever brings Christians nearer to God was to be seen as an evidence of His love and a desire to abundantly bless them.

A couple of brief quotes will hopefully give a small glimpse of the great depth that is so abundant in the written legacy that the Puritans have left us: p.31"How do afflictions make us happy,we reply that,being sanctified,they bring us nearer to God." p.52" God does not deal alike with all ,He has trials for the strong and cordials for the weak... if God does not give you that which you like,he will give you that which you need."

In Christ's school of learning ,(how the Lord providentially uses affliction,temptation and sin)for the believers good ,the Puritans are masterful teachers,and books such as 'All things for Good' should not be neglected to help instruct us in these important matters.