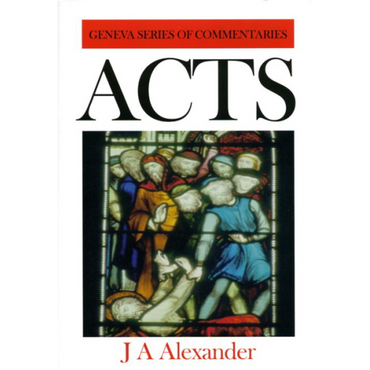 The third son of Archibald Alexander, Joseph Addison Alexander (1809-1860) graduated at the College of New Jersey in 1826, having devoted himself especially to the study of Hebrew and other languages. From 1830 to 1833 he was adjunct professor of ancient languages and literature at the College, and then moved to Princeton Theological Seminary as an assistant to Charles Hodge, professor of oriental and biblical literature. In 1838 Alexander became associate professor, and succeeded Hodge in that chair in 1840. He transferred in 1851 to the chair of biblical and ecclesiastical history, and in 1859 to that of Hellenistic and New Testament literature, which he occupied until his death. The Trust publishes his Commentary on Acts, in the Geneva series.

The author was the third son of the famous Archibald Alexander, and an eminent Christian teacher in his own right. The Schaff-Herzog Encyclopaedia described him as the most remarkable linguist ever produced by America. Like his father, Alexander taught at Princeton Theological Seminary, occupying successively the chairs of Oriental and Biblical Literature, Church History, and New Testament Literature. His premature death was called by A.A. Hodge, 'the most disastrous blow the institutions of Princeton ever experienced'. Of this commentary on Acts C.H. Spurgeon wrote, 'In all respects a work of the highest merit'. J.H. Thornwell held the same opinion: 'Alexander's commentaries on Acts and Mark I regarded as models, as nearly perfection in their kind as human skill could make them, and I have been in the habit, not only of recommending them, but of insisting on my classes procuring and studying them'. Alexander's merit as a writer lies in his clarity and precision of thought. His great purpose is to state the meaning of the text of Scripture and the continuing demand for his commentaries is one proof of the extent to which he succeeded.

We received the book and it was in better condition than described. We bought the book for a friend that was going to give it to their mother, however after she seen the condition of the book she decided to keep it and get her mother another copy. Thank you for everything.