A Sure Guide to Heaven by Joseph Alleine (Paperback) 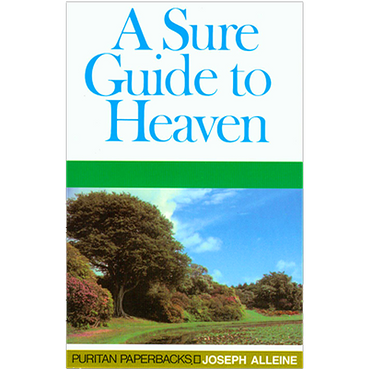 A Sure Guide to Heaven by Joseph Alleine (Paperback)

This book was previously published by the Trust under the title "An Alarm to the Unconverted".

When the spiritual history of the Western World in the 20th century is written, it may well be seen as the epoch of spiritual sloth and slumber. Eternal realities seemed vaguely-defined and far-removed from daily life, and conformity to the world took the form of carelessness and neglect of spiritual issues. That is why it is no anachronism to republish a book from a day when men were more deeply conscious of the world to come, written by a servant of God whose preaching and writing were used to alarm and awaken many to the concerns of life and death.

Joseph Alleine (1634-1668) was born at Devizes in Wiltshire and 'set forth in the Christian race' from the age of eleven. Educated at Oxford (Lincoln and Corpus Christi) from 1649 under men such as John Owen and Thomas Goodwin, he took his BA in 1651 and became a tutor and subsequently chaplain to the College.

In 1655 Alleine accepted an invitation to become assistant to George Newton, vicar in Taunton, Somerset, and in the same year married his cousin, Theodosia. His ministry in Taunton was very fruitful until his ejection in 1662, but he continued to preach at every opportunity. His health was affected by the privations of two confinements in prison, and he died at the age of thirty-four.

This book should be required reading for all who call themselves Christians! Instead of the 4 Spiritual Laws, we should be reading this marvelous work be this great Puritan Evangel. In less than 150 pages Alleine walks us through what a true conversion consists of . Alleine tells us some of the mistakes about conversion, the nature of conversion. To me the best chapter is 4 where he gives us the Marks of the Unconverted. Upon reading this I found my soul deeply disturbed, as it was obvious that I was in an unconverted state, 25 years after praying to "receive Christ". I soon made a total surrender of my all to Christ, vowing to live a holy life before Him. He points out our lives, not our lips are the truest evidence of a saving faith. He closes by showing us how to be converted, that the gates of Heaven and Mercy are thrown open to us, and the Savior waits to embrace all who will accept as LORD of all they do. When I get to heaven after I first embrace the savior, I will search out Joseph Allenie.