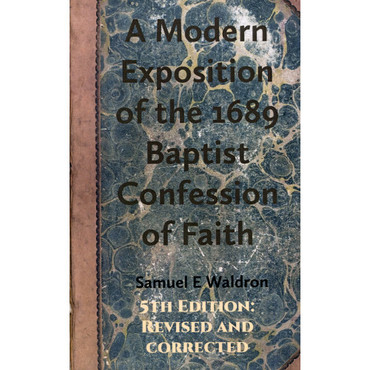 Initially published in 1989 to mark the 300th anniversary of the publication of the Second London Confession, which also became known as the 1689 Baptist Confession of Faith, A Modern Exposition of the 1689 Baptist Confession of Faith, 5th Edition is Dr. Sam Waldron's extensive exposition of a statement of faith that has long been held in high esteem by Reformed Baptists world-wide. In this thoroughly revised and corrected fifth edition, Waldron forwards a direct and lucid commentary—helpful for ministers, students, and laymen alike—that not only elucidates meaning and reveals that the 1689 Confession is a masterly statement of the historic Christian faith, but also demonstrates its relevance and application to our modern age.

Included in this publication is a helpful introduction on the legitimacy and use of confessions by Dr R. P. Martin, who is now in glory but was formerly Pastor of Emmanuel Reformed Baptist Church in Seattle, Washington.

Dr. Sam Waldron is the Dean of Covenant Baptist Theological Seminary and Professor of Systematic Theology (cbtseminary.org). Dr. Waldron received a B.A. from Cornerstone University, completed studies equivalent to an M. Div. at Trinity Ministerial Academy, obtained a Th.M. from Grand Rapids Theological Seminary, and attained a Ph.D. from Southern Baptist Theological Seminary. From 1977 to 2001 he was one of the pastors of the Reformed Baptist Church of Grand Rapids, MI. He is now one of the pastors of Grace Reformed Baptist Church in Owensboro, KY.

One of the only commentaries on the 1689 LBC. It is well written and remains faithful to the confession while explaining the positions brought forth within its pages. If you are seeking a better understanding of what the LBC teaches or if you are an elder teaching your assembly the confession, I would recommend the use of this book. In my case, I am an active teaching elder in my church and am using this book as a helpful resource in the teaching of the 1689 LBC to our people. I have come to greatly appreciate​ it. -